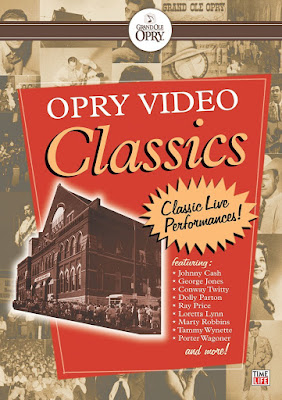 The only two original titles of this set are Kings of Country and Jukebox Memories. Kings of Country is fairly self-explanatory, including songs performed by 15 male country stars with big personalities and the musical skill to match it. The only thing I found strange was the mention of Johnny Cash in the set description despite his absence in the playlist. Don’t worry too much though, as he appears on several of the other discs. Jukebox Memories includes a collection of hits likely to have been found on 45-rpm-record. Leroy Van Dyke, Bobby Bare, and Faron Young are among the 15 performers.

Of the six discs remaining, two are dedicated to the songs while the other four are focused on the performers. Love Songs 2 features some of the most romantic country of the period, both happy and sad. There are cheerful love songs like “Pure Love” and the melancholy of loss in “On Our Last Date.” Songs that Topped the Charts 2 only features songs that made it to the No. 1 spot on Billboard. This includes Connie Smith, who was the first female country star to reach the top with her song “Once a Day.”

Similar to Songs that Topped the Charts is Hall of Fame 2, which includes 15 performances from artists who made it into the Country Music Hall of Fame, created in 196. This set includes Jim Reeves, Loretta Lynn, and Johnny Cash singing “So Doggone Lonesome.” Alike in theme is Pioneers 2, though it is focused on the trail-blazers of the genre. This includes a performance from the Carter Family, Roy Acuff, Bill Monroe, along with ten others.

Legends 2 includes performances from the larger-than-life country music stars, such as Dolly Parton who performs and duet with porter Wagoner, and Loretta Lynn, who has two songs in the playlist. The highlight, however, is a collection of songs performed in a group by Johnny Cash alongside the Statler Brothers and the Carter Family. This medley opens with “I Walk the Line” and ends with “Ring of Fire.” Queens of Country 2 includes more from Loretta Lynn and Connie Smith, who belong on this list, if only for the number of times they show up in this set.

The previous collection had interviews with many of the performers in the special features. This second release comes without any extras, though this shouldn’t detract fans of the music.