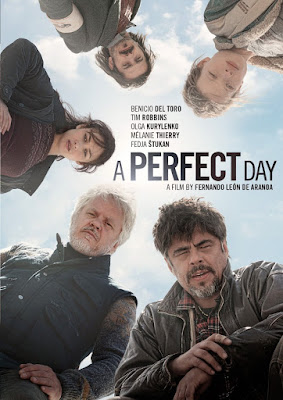 Set “somewhere in the Balkans” in 1995, Mambrú (Benicio del Toro) leads a team of humanitarians in efforts to make a difference. Over the course of a 24-hour-period, these efforts mostly involve attemps to remove a dead body from a small local well. The team includes naïve newcomer Sophie (Mélanie Thierry), wisecracking veteran B (Tim Robbins), and their translator Damir (Fedja Stukan). They are also joined by Katya (Olga Kurylenko), sent in to evaluate the team’s efforts. The fact that she has the ability to shut them down is further complicated by an affair Katya and Mambrú had during a past mission. This also provides the film’s most unnecessary sub-plot, dragging an otherwise quick-paced screenplay into relationship conversations which seem to go nowhere.

Much of the film is dedicated to the single task of removing the corpse from the well before the water supply for the area is completely contaminated. This requires rope, which proves difficult to come by in a combat zone, sending the team on a series of wild goose chases. Along the way they pick up a local child willing to help, though he is in more need of assistance than they are. The atrocities of war are briefly addressed, but the film remains mostly dedicated to the portrayal of unsuccessful humanitarian efforts from the team. Regardless of how much their wheels spin, not much progress is made over the 24-hour period with Mambrú and his team.

A Perfect Day is one of the few war films unafraid to avoid action, teasing the possibility of explosions without any pyrotechnics to pump up the narrative. It is a rare movie where guns are seen but never used, bombs are a threat discussed but not experienced, and death is present but kept in the background. With a dead body at the center of the plot, we are aware of the gravity of the situation while the jaded humor of the humanitarians provides levity to the situation. It is a cinematic balancing act that mostly works thanks to a clever screenplay and understated performances from the lead actors.

The Blu-ray release of A Perfect Day comes with a handful of featurettes, which includes a generic making-of video. Also included are interviews with key cast and crew members, and the film’s trailer.