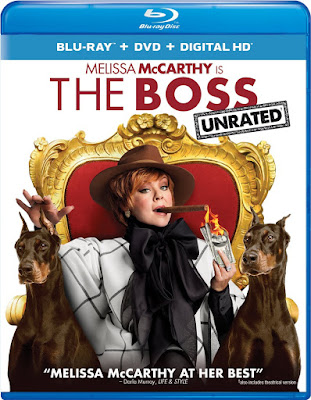 Their technical collaboration began when the husband and wife co-wrote Tammy for Falcone to direct, and continues with the larger budgeted and equally unfunny film, The Boss. Despite McCarthy’s freedom to write plenty of cleverly vulgar dialogue for herself, The Boss is another failed attempt at comedy relying almost entirely on a predictable redemption narrative. McCarthy may be one of the strongest actresses working in comedy today, but she is also only as good as the material she is working with and doesn’t have the same abilities as a screenwriter. It is also beginning to seem as though only Paul Feig and the sitcom structure of “Mike & Molly” know how to properly utilize the actress’s talents.

The basic premise of the film is just an excuse for McCarthy to showcase a former character she used to use for a stand up routine. This is about as successful as many of the adaptation of “SNL’ skits into feature films. Michelle Darnell (McCarthy) is a self-reliant orphan who grows up learning only to care about herself, which leads her to become a successful businesswoman until being sent to prison for insider trading. When she is paroled, Michelle reaches out to her formerly abused assistant, Claire (Kristen Bell). If McCarthy has fallen into a rut of playing foul-mouthed female roles, Bell is starting to make a career out of playing a single mother with a slight tendency towards being a pushover. Mostly Claire only exists for Michelle to bounce her crude quips off of.

Michelle takes advantage of Claire’s spinelessness by becoming a permanent houseguest, eventually even using Claire’s daughter, Rachel (Ella Anderson) for a new business venture. When discovering that Rachel’s Girl Scout-like group, the Dandelions, make a fortune off of the cookies that they sell, Michelle comes up with a ridiculous plan to start a new successful business selling brownies. Forget the fact that this plan relies on the free labor of young girls selling the goods, or the fact that the Dandelions sold cookies for fundraising while Michelle sells brownies for her own financial gain. These are details of logic which cannot be considered within this thoughtless screenplay.

This movie doesn’t have to make sense. As a comedy, all would be forgiven if it at least had the ability to make audiences laugh. Despite being R-rated, however, the humor is as sophomoric as it gets. Creative cursing and poorly executed slapstick humor are all that the film has to offer, which may have worked for a younger audience. The film feels destined to be PG-13, even including a number of young girls in the cast, but tries to make the immature humor work for an adult audience. In the end, I couldn’t help but wonder who this film was intended for. All I know for certain is that it didn’t work for me.

The Blu-ray release comes with a few exclusive special features, including the original Michelle Darnell comedy sketch which inspired the screenplay and a featurette on her origin story. There are also two featurettes for supporting stars Kristen Bell and Peter Dinklage. Also in the extras is plenty of additional footage, including deleted scenes, extended/alternate takes, an alternate ending, and a gag reel. The Blu-ray also comes with a DVD and Digital HD copy of the film.