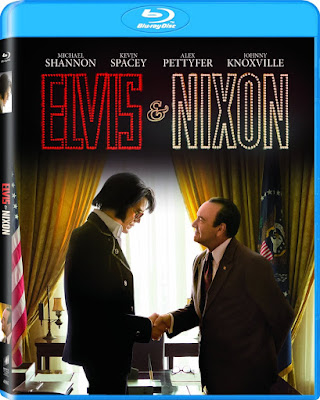 Based on actual events with plenty of imagined dialogue to fill in the unknown details, the film centers on the Oval Office meeting between the two title characters but spends much of the screen time building up to this encounter. After witnessing the state of the world as portrayed by the news outlets, Elvis Presley (Shannon) decides that it is his responsibility to do something to help his country. Having been made an honorary deputy in his hometown, Presley sets out on a mission to receive another badge and a title from the federal government. Visiting the White House in secret, Presley hopes to become a top secret DEA agent able to go undercover to stop the drug epidemic. Despite having one of the most recognizable faces in the country, he believes this is possible due to his experience as an actor.

The backstory for Nixon (Spacey) is far less detailed, though there is some playful foreshadowing of criminal events to come. Much of the humor between Nixon and Presley comes from the fact that neither is accustomed to being anything less than the most powerful person in the room. Nixon initially doesn’t want to be bothered to meet anyone as trivial as an entertainer, and Presley can’t comprehend why his request for a meeting with the president is not immediately granted. Nixon has specific rules and demands given to those meeting him in the Oval Office, and much like a touring rock star even has specific food requirements. Similarly, Presley shows up to offer his services as a secret agent while making demands of his own. Most importantly, he insists upon receiving a badge for his collection.

The one fault of the film, beyond a missing point to the speculative recreation of an actual event, is the lack of depth seen in the two title characters. The portrayal of these two icons of American history is often dimensionless in how they are presented, despite convincing efforts from the cast. What makes it somewhat forgivable is the fact that neither Elvis nor Nixon is the protagonist of the film. While the title characters occasionally come off as caricatures, the staff each has working for them are a bit more fleshed out.

On Nixon’s side it is Bud Krough (Colin Hanks), Dwight Chapin (Evan Peters) and HR Haldeman (Tate Donovan), playing up the political humor in their attempt to obtain much-needed public approval from the rock star’s visit. Presley is joined by Sonny West (Johnny Knoxville) and Jerry Schilling (Alex Pettyfer). Knoxville is well cast, despite only having the ability to play characters which seem remarkably similar to the actor’s natural personality. Regardless, the former “Jackass” star provides the film with additional levity. Although Schilling no longer works for Presley, he agrees to go along with him on the expedition to Washington DC as a friend. If there is growth and depth in any character, it is seen in Schilling, who is the closest thing Elvis & Nixon has to a protagonist.

The Blu-ray release of Elvis & Nixon comes with a feature-length commentary track with director Liza Johnson and the real Jerry Schilling, which is the standard of remarkable we should hold all special features to. The only other extra is a featurette about the truth behind the film’s events. Though the extras are minimal, the commentary packs enough punch to forgive what may have been left out.