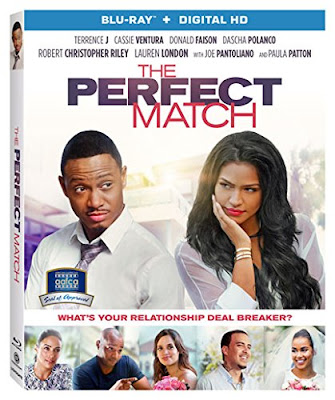 The plot for The Perfect Match is so generic that I wouldn’t bat an eye if told it were a remake. Charlie (Terrence Jenkins) is a successful agent with a beachside home and a popular Instagram to show off his photography hobby, which is mostly used to get a variety of attractive women into bed. Charlie’s four closest friends are coupled off and constantly give him a hard time for being single, betting him he can’t date the same girl for an extended period of time. Predictably, Charlie chooses to date Eva (Cassie Ventura), who makes it clear that she is only interested in a casual relationship.

Though this relationship is at the center of the narrative, this amateurish screenplay gives them very little time together. After a horrible meet-cute in a trendy juice shop that Charlie frequents, Eva basically only reappears in the story for the occasional sex scene. The most significant element of a romantic comedy is the relationship between the two leads, but it is near impossible to believe any feelings are developed when all they have are two sex scenes in bathrooms and an amateur photo shoot in Venice. It doesn’t help that the lead actors have zero chemistry, mostly due to awful casting choices more interested in fame than talent.

Terrence Jenkins has built his career on being a television host, flashing his go-to smile with ease but unable to make any of the poorly written dialogue convincingly human. Jenkins isn’t helped by the fact that nearly all the script provides him is awkwardly presented exposition, including a constant regurgitation of Charlie’s “rules” with women, but even he comes off as a movie star compared to Cassie Ventura’s half-assed attempt at acting. Despite not being a good actor, at least Jenkins gave the appearance of trying, while the musician and former model is a complete zombie every time she is onscreen. Apparently nobody told Ventura that acting is more than just looking pretty and disinterested, because she has all of the energy and personality of a rock. Despite her lack of screen time making the central relationship even harder to believe, I was just thankful that the amount of time I had to endure Ventura’s horrendously lifeless performance.

To make up for the missing scenes of romance between the implied leads, The Perfect Match spends a great deal of its run-time on sub-plots and the relationships of Charlie’s friends, none of which are very kind in their portrayal of women. Although Charlie’s two guy friends, Rick and Victor (Donald Faison and Robert Christopher Riley), are thoughtful and sensitive men in committed relationships, their significant others are portrayed as irrationally angry women. Rick’s wife Pressie (Dascha Polanco) is so irritated at their failed attempt to get pregnant that she constantly complains about not wanting to have sex with her husband anymore. Victor is in the process of planning a wedding with Ginger (Lauren London), who naggingly insists on spending as much money as needed to have the trendy wedding she has dreamt of. Nearly every female character is portrayed as angry, bitchy, and/or completely selfish in their actions, with the possible exception of Charlie’s sister (played by an overly upbeat Paula Patton).
None of these performances are good enough to make up for the shortcomings of the screenplay and filmmaker Bille Woodruff’s inability to direct actors. He handles the sex scenes well, mostly because they are sanitized and glossily presented like the music videos most of his experience has come from. The other problem with these performances begins with casting, as it is obvious that many were chosen for their established fanbase rather than the talents they don’t possess. Many likely know Polanco from her role on “Orange is the New Black,” but this performance is far from proof that she can exist outside of that role. I never thought she was the strongest actress on the Netflix series, but at least it was less apparent under the supervision of more talented directors and editors.

Fortunately for Polanco (and unfortunately for audiences), she is not the worst casting choice. With Charlie’s ambiguous job as an agent that represents everyone from rappers to YouTube “stars,” and inexplicably even a cell phone app, there is plenty of room for uncomfortable cameos as supporting performances from minor celebrities playing themselves. Many of these are not actors, and while screenplay makes fun of the idea of a Vine star, the production buys into this shameless trend in casting. If anyone actually sees this film because they are a fan of an internet star with a cameo, they deserve every bit of this crappy film. I’m sure it will be an improvement on their usual online entertainment, while The Perfect Match is almost unwatchable for those accustomed to actual talent.

The Blu-ray release comes with a Digital HD copy of the film, especially for those accustomed to watching things on the internet rather than a television. The special features include three generic featurettes, covering the making of the film and the comedic elements attempted. There is also a cast and crew commentary track in which they have more fun watching the film than I imagine any audiences will. It may seem like I’m being unfairly harsh on this film. Let me put it this way; as I was watching The Perfect Match, I actually began to long for the cinematic stylings of Tyler Perry.