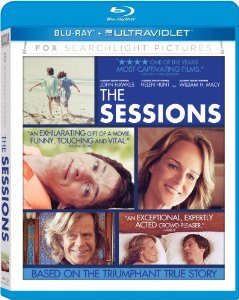 The Sessions is a nice performance based independent film, one which deals with drama and comedy with the same light touch. There is nothing remarkably daring or profound within the screenplay based on a true story written by filmmaker Ben Lewin. In fact, some aspects of the film feel too safe for an independent film, even if the subject matter would suggest material more risqué or daring. This is a safe little film which is ultimately a performance piece within a dramedy.

John Hawkes stars as Mark O’Brien, a poet and journalist who has been paralyzed and confined to an iron lung since childhood. Despite his handicaps, he was able to attend a university and receive a degree, and can even provide for himself with a job. The one thing he has never gotten around to accomplishing is the manhood rite of passage that is losing his virginity. As a devout Catholic, Mark seeks counsel from his priest (William H. Macy), who is more than encouraging in the endeavor.

Mark seeks out a sex therapist (Helen Hunt), whose professional attitude and kind demeanor help the uncomfortable paralyzed 38-year-old have sex for the first time. They have a finite number of sessions together before the arrangement is completed, and the meetings inevitably become about more than just mere intercourse. There are some awkward bits within the screenplay, but even those are glossed over so quickly that this often feels like a imitation rather than the edginess I would have once expected from an independent film.

The Blu-ray includes a number of features, from deleted scenes to a handful of featurettes. There are some real-life behind-the-scenes featurettes, to show the inspiration behind the story. There are also featurettes for each of the main actors, who are showcased within the film and have been the highest selling point during this award season. There is also a general featurette about the cast.