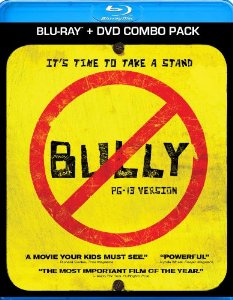 As I watched Bully, I found myself wishing I could reach through the screen and hug some of these children. There is only so much that can be done about bullying, especially when it is not a physical threat but mere teasing instead, and the kids that are different are always going to be the likely targets. Some of the bullies angered me, but more often I simply felt empathy for the kids who don’t fit in. They are different, and even when they aren’t being picked on, you can see the sadness some of them would still carry simply from the loneliness of having no friends. I felt for these kids more than I felt anger at the bullies, who often seem to be struggling with their own fears and insecurities of childhood.

The film follows five children with different issues making them a target for bullies. Over the course of one school year we see their personal struggles, each unique to the specific types of bullying they must endure. We follow a lesbian in a Midwestern small town public school, as well as a young boy whose social awkwardness makes it difficult for him to make friends in a tougher school. Other stories are not as traditional to follow, including the incarcerated young girl who pulled a gun on a school bus after having been bullied for the last time. Another story follows the grief of parents who lost their son to suicide after the bullying became unbearable.

The filmmaking is adequate enough, but the true reason for the compelling nature of this documentary is simply the human element. These are real people struggling with real hardships and life realities. In some cases the children seem to handle the abuse far better than the parents, who feel a sense of helplessness to the situation. There is only so much that they can do for their child, especially when the school officials are also unable to legally do much. ‘Kids will be kids’ seems to be the mantra of the bullies and their parents, leaving the victims with little choice but to endure, usually with the parents constantly encouraging them to stand up for themselves.

The Blu-ray includes the PG-13 version of the film, which merely means that a few of the foul words are bleeped out. There are many special features, including another version of the film for an even younger age group. There is also an update on the children from the film, deleted scenes and many featurettes about getting involved in the campaign to stop bullying.