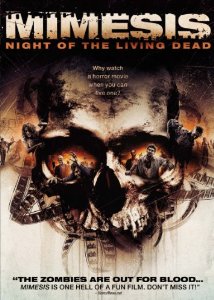 There is a really interesting premise in this film, albeit one which is reminiscent of a recently successful horror film, while also blatantly ripping off a classic. Mimesis: Night of the Living Dead uses the structure of the beloved classic zombie movie, while also utilizing the insertion of helpless victims into the roles of the movie characters. If only this premise weren’t so unbelievably similar to Joss Whedon’s Cabin in the Woods, it may have actually been slightly effective. Unfortunately, with originality removed, all that is left behind is bad acting and poor effects.

The story begins with a party following a horror convention. A bunch of movie geeks gather at a house, only to awaken the next day finding themselves dressed and placed in seemingly random areas. Eventually they piece together the details and realize that they are living out George A. Romero’s Night of the Living Dead. Once they know this, you would think that they could predict what was going to happen and stop it, but this is where the storyline finally deters away from the previously established structure of a well-known horror classic. Unfortunately, the film drags its feet so slowly through the first portion; it almost just feels like a bad remake of the original.

Perhaps I am being too unkind to this independent horror film, but there are just so many of these to wade through that I tend to feel unimpressed by a majority of them. Mimesis isn’t a good film, but by comparison it also isn’t one of the bad ones either. It falls somewhere in the middle, in the easily forgettable zone. The DVD includes an audio commentary by director/co-writer Douglas Schulze and co-writer Joshua Wagner.