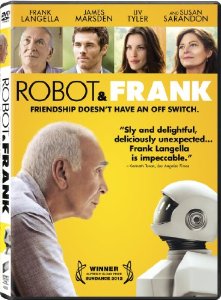 Science fiction has crept into independent filmmaking in a big way these last few years, from visions of the apocalypse to space discovery. By comparison, Robot & Frank seems nearly grounded in reality, aside from the fact that a co-star is a robot. It is a comedy which just happens to utilize some of the benefits of science fiction, though no amount of special effects could detract from Frank Langella’s performance. Fortunately, the director doesn’t even try, knowing that the simplicity of the film is what makes it work. Not ever science fiction film needs to have a special effects budget that is larger than the cost of the cast.

Langella stars as Frank, a retired cat burglar whose aging has begun to worry his children (James Marsden and Liv Tyler). Their only solution is to buy their father a robotic caretaker, to cook him healthy meals and clean the house. The robot becomes something of a friend to Frank, as well as a useful tool when the retired thief decides to get back into the game. Between Frank’s experience and the robot’s mechanical abilities, they are able to pull off near impossible thefts together.

The main reason that Frank finds to come out of retirement is a friendly librarian (Susan Sarandon), whose kindness gives Frank reason to find ways to repay her the only way he knows how. Realizing that the robot has no moral programming for theft, it makes him the perfect partner. The only danger is the recorded programming which threatens to give away their crimes together, and erasing the memory would mean erasing the friend he has adopted in the robot as well.

The DVD includes a commentary track with screenwriter Christopher Ford and director Jake Schreier, as well as a robot poster campaign feature.