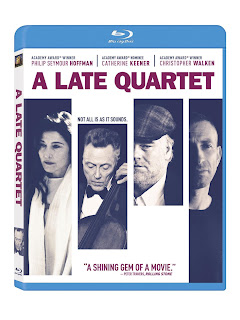 A Late Quartet is one of those gems of movies that you can be proud to introduce to cultured friends with good taste. Although few are likely to have heard of it, I found the acting and the drama to be comparable if not better than most of the films nominated for awards this season. Philip Seymour Hoffman was nominated for his performance in The Master, but I found him equally compelling in A Late Quartet, even when the melodrama of the film pushed the boundaries slightly.

The film is about a perfect quartet, which is forced to change when the eldest member and cellist (Christopher Walken) announces that he has a debilitating medical condition which makes his career as a musician impossible. This news sends shockwaves through the other three members of the group, which include his daughter (Catherine Keener) and her husband (Hoffman). Each of them take he news differently, with the famed first violinist (Mark Ivanir) taking the most clinical approach to replacing a friend.

This is a performance-based film, though this is not code for boring. I found myself enthralled by the acting in this film, regardless of the fact that much of the film is just four characters arguing and discussing music. The screenplay obviously comes from a place of well researched understanding of classical music, and those are the parts which stand out above all else. The Blu-ray includes a solitary making-of featurette, though the film alone is a beautiful accomplishment.