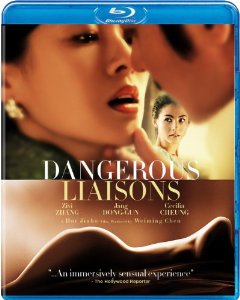 The last thing this world needed was another Dangerous Liaisons remake, regardless of the fact that it was made in a different country. Now it has become just as common for foreign countries to remake films as is likely to remake films them. We are all just borrowing from each other, and Dangerous Liaisons has been made in several different countries, different time periods and in different languages. The problem is, the story s the same no matter how you tell it, and this latest version has absolutely nothing new to contribute besides some glossy new photography.

Set in 1930s , known by some as the “ of the East,” there are comparable replacements in the storyline from the original French text. There have also been some alterations to the relationships between characters, even further castration of any risqué material. Aging socialite Mo Jieyu bitterly plays with the lives and emotions of others around her, including her ex-boyfriend Xie Yifan (Jang Dong-kun), who often joins her in destructive manipulations.

Xie still pines after Mo, so they make a wager that will allow Xie to fulfill his carnal indulgences with his past lover. All Xie has to do is seduce a virgin socialite, though along the way he discovers a true romantic interest in humanitarian Du Fenyu (Ziyi Zhang). This ill-fated romance between a womanizer and a humanitarian is difficult to believe in the rushed 111 minute running time. Though I am grateful that the story I was already familiar with was not dragged out any longer than it was, something was missing to make me believe in the romance at the center of film’s plot.

The Blu-ray includes a making-of featurette and a behind-the-scenes featurette, as well as a trailer gallery.