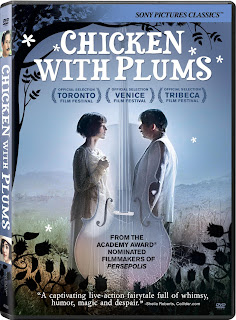 The presentation of Chicken with Plums is so whimsical and fun, I was taken aback by the darker shift in narrative towards the film’s end. There was no preparation for the level of seriousness, mostly because the tone is set at a much lighter level when we begin. Previously, filmmaker Marjane Satrapi dealt with heavier themes within the lighter context of animation in , but it doesn’t work out quite as well in live action.

Though this film feels uneven at times, there is still much to be admired. Performances and creativity alone make it a worthwhile film to watch. The movie begins with a world-renowned violinist seeking a new instrument to play after his is damaged in a fight with his wife. Each instrument he finds fails to produce the same sound as his beloved violin, so Nasser-Ali Khan decides to go to bed and await death. As he starves himself to death, he has visions and insight, along with memories of his youth. These discoveries are made on his death bed, as his children and wife watch him selfishly wither away.

There is a love story amidst all of the selfish behavior, though it is not one with his wife, making our protagonist more than a little unlikable at moments. The film doesn’t really stop long enough to examine the faults in the protagonist, instead glossing past it into the romantic side of the storytelling. The DVD includes a commentary track with directors Marjane Satrapi and Vincent Paronnaud, as well as a Q&A with them.