Where Do We Go Now? Blu-ray review 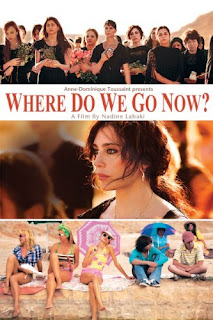 Where Do We Go Now? is a modern fable with remarkable relevance while retaining unimaginable whimsy and charm. The subject of religion is one which has long caused wars and devastation, yet this film somehow manages to address these issues in fervor of personalized hope of change. The conflict is localized within the film, but it could retain the same relevance for any number of conflicts around the world.

Set in a remote Lebanese village where a church and a mosque stand side by side in the center of town, a group of mothers devise a plan to keep the peace. In other parts of the country there are Christians and Muslims fighting and killing each other, but the women of the small village have kept peace with a number of ruses. They realize that as long as the men are ignorant to conflicts elsewhere in the world, they will be able to coexist and even intermingle without conflict. Once a television is brought out for entertainment, however, they incidentally expose their men to news of conflict elsewhere.

It is interesting to see how the knowledge of a fight in the country instigates a conflict in a village which was otherwise peaceful. Even more compelling is the desperate efforts of the women to keep their men distracted. They hire a group of Ukrainian dancers to flirt with their men and keep them preoccupied. When that doesn’t work, they have a master plan involving drugs, dancing and the ultimate trick.

The Blu-ray release of Where Do We Go Now? comes with a filmmaker’s commentary with director Nadine Labaki. There is also a featurette with the director, Khaled Mouzanar and Anne-Dominique Toussaint, a making-of featurette and a making the music featurette.