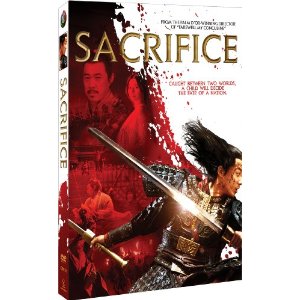 Sacrifice is a slow burning revenge film of epic proportions, both sweeping in grand scope and emotional precision. It is a lavish martial arts film within a much more complex human drama, and all of this is possible due to the steady hand of director Kaige Chen (Farewell, My Concubine). The film is filled with impressive cinematography and breathtaking fight choreography, but this is still secondary in importance to the characters within the story and the choices that they make. Above all else, this film is about the complexities of loyalty, sacrifice and vengeance.

The beginning of Sacrifice begins as so many of the martial arts epics do; with ancient in general turmoil. When a powerful general (Wang Xuegi) seizes the throne at the court of Duke Ling, pinning the crime on the rival Zhao clan. They are all massacred to hide the deception, with only a single baby to survive. This child is snuck out with the help of a loyal doctor (Ge You), who incidentally has a child of his own. When the search for the missing Zhao child brings the general to the doctor’s home, it results in a switching of the children. The Zhao child survives, but at a great cost to the doctor.

The resulting years have the Zhao child raised in the general’s household; all the while the doctor plans his perfect revenge against the tyrant. The film is more like a game of chess than an action film. Each of these two men know they have an enemy in each other, but they each have full confidence in their own influence on the boy. After years go by, this has not changed. All of the plans made by the doctor and the punishment of the deceitful general lies in the hands of one boy, whose mind must be made up on his own.