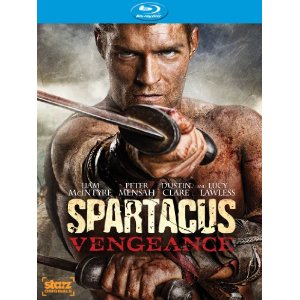 The first season of Spartacus was a 300-style visual approach to the classic tale of a gladiator’s uprising, though it left off with the beginnings of the uprising. With the actor in the title role battling disease, the second season became a prequel. A prequel to Spartacus, which is strange considering the title of the series is still “Spartacus” despite having no character by the name. Instead, the second season shows the rise of the House of Batianus before its fall in season one. This includes the beginnings of the gladiator known as Crixus. Season three manages to bring us back to the place where season one left off, though it also creatively blends the characters and plot developments of the prequel season to make Vengeance all the more interesting.

Liam McIntyre steps into the role of Spartacus as the story develops beyond the gladiator battles and into the battlefield. This season follows the path of the slaves and gladiators as they start to build an army to take down the Roman tyranny. Though there is no denying the fact that the change in cast is noticeable, though the violence seems to have increased as well, making it easy to be distracted. There is a lot going on this season, if only because they have blended characters from the two previous seasons, giving plenty of plot and character development in-between bloody battles and flesh-filled sex scenes. This is still one of the most visually engaging shows on television, with a story that occasionally matches the images.
Because the visual quality is increasingly impressive, it is deserving of the high definition presentation that Blu-ray offers. The Blu-ray also has special featurettes that show the post-production efforts as well as many production elements which make this show the visual spectacle that it is. Special features also include bloopers, and a special look at the next and final season in the series. Exclusive to the Blu-ray are audio commentaries and extended versions of select episodes.