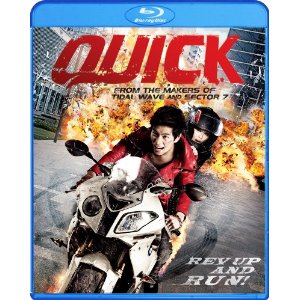 Quick is like the Korean version of the 1990s blockbuster, Speed, minus the bad acting from Keanu Reeves. It is also a little bit like Die Hard With a Vengeance, another 90s action classic. Even the back cover of Quick says “It’s Speed on a Motorcycle,” and it is that motorcycle which sets this film apart, if only slightly. Korean cinema has mirrored in the 90s for the last decade or so, pumping out entertaining spectacle such as this at a rate that rivals most countries’ national cinema.

This is not to make Quick seem like a cinematic triumph, because in many ways it is simply sub-par entertainment. There are cheesy elements and some unbelievable action which is accomplished only thanks to computer generated graphics to help the impossible become possible. The difference between a film like this and Premium Rush is the amount of stunts which can actually be accomplished by stunt men and not CGI graphics.

Beyond the occasionally unbelievable use of special effects, Quick is a solid piece of entertainment which is able to bounce back and forth from comedy to action within the fast-paced storyline. Gi-su was formerly the leader of a motorcycle gang, but after a tragic accident he is living as a bike messenger. When the horrors of that one night come back to haunt him, Gi-su finds himself targeted by a madman who is setting bombs off across the city, and using a very specific bike messenger to do it.

To complicate issues, Gi-su gives a ride to a pop star and former girlfriend. When she puts on the bike helmet, Gi-su discovers it has been booby-trapped by the mad man, in order to assure each of his bombs are dropped off on time. With each new bomb there is a timer set on the bike helmet, threatening to blow up if the destination is not reached in time.

The Blu-ray release comes with a making-of featurette, not to mention a featurette on that lovely CGI work. There is also anther featurette on the actual stunt work of the film and one on the making of the poster design.