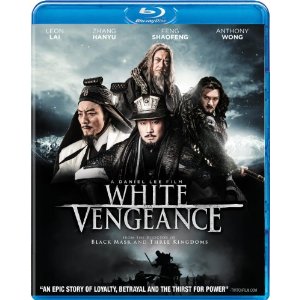 White Vengeance is a complex film about the thirst for power and the corruption and deception that comes with it. This is not a typical martial arts epic, where it is clear who the bad guys are and who our hero is. There are characters of certain integrity which we may be drawn to within the storyline, but when the love of one woman and the promise of unimaginable power is brought into the equation there is no telling who can be trusted.

During the fall of the Qin Dynasty, two friends are brought into a world of changes that alter the course of their relationship with each other. Liu Bang (Leon Lai) and Xiang Fu (Feng Shaofeng) each have their own motives for entering into the bloody battles that would come to be known as the Red Cliff rebellion bringing down the Qin Dynasty. With the infamous battle known as the Feast at Hong Gate as the backdrop, there is also the added complication of a beautiful woman loved by both men.

There is a great deal of action within White Vengeance, and it is fairly stylized despite the story being based upon facts. Part of this seems to come from director Daniel Lee (3 Kingdoms, Black Mask), who seems to have a penchant for strong visuals. This does not detract from the power of the history behind the story, but it is clear that this is a fictional film set within historical times rather than a historical film using fiction to enhance it.
The Blu-ray release includes a behind-the-scenes featurette, as well as interviews with the stars and select crew members and a trailer gallery. The highlight, however, seems to be the sound improvements which come from the DTS-HD Master audio, which utilizes the surround sound despite only being 5.1. The battle scenes pop with added audio enhancements.