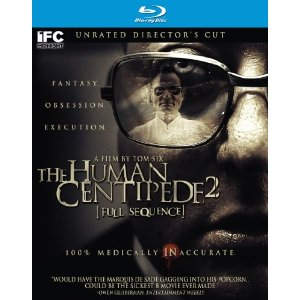 The Human Centipede was a horrendous little horror film which was based entirely on a premise of medical accuracy. It was vulgar and disgusting in many ways, though there was an element of professionalism carried out by the mad scientist at the center of the film. The sequel pushes the boundaries in another direction, replacing mad scientist with simply mad. There is little brilliance and much more instability, and medical accuracy has flown out of the storyline entirely.
The manner in which the storyline from the original is continued is quite clever, although there are so many unnecessary and inappropriate boundaries pushed in this sequel that it overshadows positive or clever qualities. The Human Centipede was about a mad German scientist, Dr. Heiter, who was obsessed with a medical experiment connecting the digestive track of three human beings. The Human Centipede 2 is about a man obsessed with the film, determined to make his own full sequence human centipede.
Martin ( R. Harvey) is a parking garage security guard with mother issues and an unhealthy obsession with one particular horror film. We join Martin amidst his silent planning for his own experiment. The reason it is silent is because Martin never speaks throughout the film, which is a stark change from the medical lectures of Dr. Heiter. Instead, Martin just grunts and groans. He makes farting noises.
The silence in interesting and impressive, but the restraint in dialogue is expended in the other elements of the film, from foul feces sequences to a graphic rape. Most is done in absolute bad taste. Even the classier elements of the film are eventually fouled. For example, this time around the film is shot nearly entirely in black and white cinematography. I say almost entirely, because filmmaker Tom Six somehow saw it necessary to make the feces spurting from the victims to be one of the only colorized objects in the film.
The Blu-ray includes an interview with Six, along with a commentary that has the director and his star, . There are three other small featurettes and some deleted scenes. The marketing material makes up a large portion of the special features. This film was promoted and pushed on audiences, though I have pity on anyone enduring this graphic and tasteless unrated director’s cut.
Starring: Laurence Harvey, Ashlynn Yennie, Maddi Black
Director: Tom Six
Format: Widescreen
Aspect Ratio: 1.77:1
Rated: Unrated
Studio: MPI HOME VIDEO
Release Date: February 14, 2012
Run Time: 91 minutes