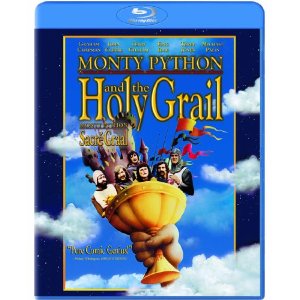 This is the Monty Python at its best. Everyone who has seen Monty Python and the Holy Grail has their favorite moments, and there are a great many to choose from. Packed with more off-beat humor than seems possible, this film is endlessly bounding from one gag to the next. There is hardly a moment’s rest from all the laughter in this brilliant film from Terry Gilliam and Terry Jones, not to mention the rest of the Monty Python gang.
Gilliam and Jones took the job of directing the film, but all of the humor is owed to the entire troop of talented writers and performers that also include Graham Chapman, John Cleese, Eric Idle and Michael Palin. The group was already known for irreverent humor, but this film would skyrocket that success. The story follows King Arthur and his knights on a search for the Holy Grail, making for one of the few medieval comedies to work. David Gordon Green should have taken note before making Your Highness.
From killer rabbits to coconuts, Monty Python and the Holy Grail has never looked more spectacular than it does on high definition Blu-ray. More importantly, however, is the amount of material which is fit onto this concise disc. The larger DVD special edition box sets used much more space to essentially include the same. There are also a few features that are exclusive to this Blu-ray disc. There is a second-screen viewing experience for the film’s playback, and a number of deleted scenes and animation sequences, with introductions by Gilliam and Jones.