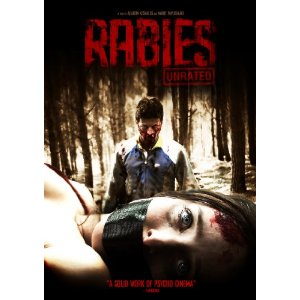 In many ways Rabies appears to be a slasher film of the most generic sorts. A group of attractive co-eds get lost in the woods and stumble across a psychotic hunter’s many traps. One of which entraps the sister of a man named Ofer (Henry David), who wanders wounded from the forest begging for assistance. What makes this Hebrew horror film so innovative is the fact that the man who sets all of the violence in action disappears before long. The remainder of the film pits each of the victims against each other.
There are plenty of reasons for these characters to fight with each other. There is a love square between two guys, a lesbian and an attractive young blonde. There is a sexually assaulting police officer, and another who is having romantic problems. Each of these characters have reasons to fight with each other, but their reactions become far more extreme than normal when in the woods. They also must beware of random traps that are set in the woods, from hunting snares to land mines.
The inexplicable nature of the violence is part of the charm, adding shock value back to the slasher film where it long since vanished. After the 80s it seemed easy to predict killers and their motives, but Rabies makes the whole endeavor seem much more random. The effects are also quite innovative, especially in the practical use rather than computer generated nonsense.
The DVD has no real special features to speak of.