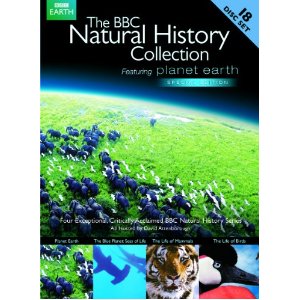 It only takes one hit in any subject and suddenly a subject can become a pop culture phenomenon. It may sound strange to refer to a nature program as pop culture, but there seems no more fitting description for Planet Earth. Watched by everyone, young and old, stoned or sober, Planet Earth became a remarkable success because of the images alone, and as audiences sat mesmerized by what the high definition cameras had captured knowledge easily pours in like medicine disguised with a cup full of sugar. It also isn’t entirely fair to call Planet Earth a sudden subject, as it was a large undertaking to make this remarkably detailed series, but it is important to acknowledge how significant it has managed to become. Since Planet Earth’s success there has been the follow-up Blue Planet, as well as a newfound discovery of many other nature programs hosted by David Attenborough. This set contains four of such programs, including Planet Earth, The Blue Planet, The Life of Mammals and The Life of Birds.
Planet Earth
Planet Earth quite literally changed how we saw the world, or at least the way we watched nature programs. Planet Earth takes a high-definition camera into the strangest and most secluded parts of wildlife and wilderness whether using a hot-air balloon, helicopter or crane to approach animals in ways that has never been done before. Nearly every episode we are informed that this is the first time something has been witness, captured on film, or both. Extensive missions are needed in order to catch some of these animals, including an incredible and dedicated mission to see a Snow Leopard in the wild. The time it took to find one is amazing, and this is shown as all of the fascinating behind-the-scenes information is given; at the end of each episode. With the Planet Earth Diary segment giving a behind-the scenes look at the amazing footage, special features are irrelevant. This is a definitive set that will be shown to our children, and possibly their children if something better is planned soon. The undertaking of this program alone is monumentally impressive and the footage is breathtaking and remarkable. The special edition is featured in this collection, which adds an extra disc and more footage.
The Blue Planet
Boasting the same producers as Planet Earth, as well as the familiar narrator David Attenborough, The Blue Planet fails to mention that the missing element is the incredible equipment used in Planet Earth. This doesn’t mean that the footage isn’t still remarkable, but it is remarkable how much the visuals can affect how engaging the program is. The show is also hit-and-miss, but this just may be my own claustrophobic feelings about the deep ocean. Although I found each episode entertaining, the moments above the water were often too brief to keep me wanting more. This is my own personal bias, but I will say that I sincerely found The Blue Planet to be far better produced than the two remaining sets in the box.
The Life of Mammals
If anything keeps this series interesting it is the focused ways they choose to look at mammals each episode. For instance, there is an episode entirely looking at the mammals that eat insects. Another looks at the plant eaters while another takes the meat eaters, but the distinction is not only by food choice, but by location as well. There is also time to take a look at the human connection, examining animals that have human qualities, and even looking at humans. There are ten episodes on four discs.
The Life of Birds
Birds aren’t quite as varied as mammals, allowing for a much closer look at the way that they work. Each episode looks specifically at aspects that distinguish them all, including flight (or non-flight), different ways of feeding, and the eggs that must be protected. The episodes use some graphics to show past estimations, which is somewhat cheesy and off-putting, but the information behind the stiff filmmaking is mostly interesting.
Format: Box set, Color, DVD, Special Edition, Subtitled, Widescreen, NTSC
Language: English
Subtitles: English
Number of discs: 18
Rated: NR (Not Rated)
Studio: BBC Warner
DVD Release Date: March 27, 2012
Run Time: 2022 minutes