Beneath the Darkness Blu-ray review 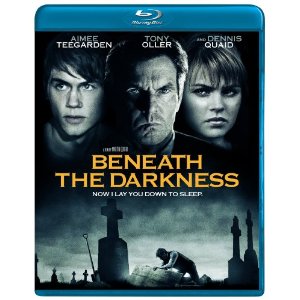 There are a few inventive ideas scattered throughout a sea of unbelievable twists and turns that make up the story for Beneath the Darkness. The initial plot is clever, but the screenplay merely takes it to the most heightened level with nowhere else to go. There is no tension, just a flowing stream of predictable coincidences. And a mildly amusing performance from Dennis Quaid.
Quaid somewhat stars as a mad funeral home director, Mr. Ely, who has a secret regarding his deceased wife hidden in his home. This secret is discovered by the high school boy who cuts his lawn, Travis (Tony Oller), and his three friends. Once the secret is discovered, one of them doesn’t make it out of the house. Predictably, nobody believes the high school kids and they are left to the mercy of the mad funeral home director.
As inventive as this initial premise is, the film quickly spirals into one cliché sequence after another. Even the actors seem to realize the absurdity of the situation, and performances seem to lag at this final third of the film. The film can’t seem to decide between committing all the way to horror and refraining to be a thriller.
The Blu-ray is entirely unnecessary, as the film is average in construction as well. There is little that high definition will improve. The special features are even sparse, including only a behind-the-scenes featurette.
Starring: Dennis Quaid, Tony Oller, Aimee Teegarden, Devon Werkheisser, Brett Cullen
Director: Martin Guigui
Aspect Ratio: 1.77:1
Rated: R
Studio: IMAGE ENTERTAINMENT
Release Date: February 28, 2012
Run Time: 96 minutes