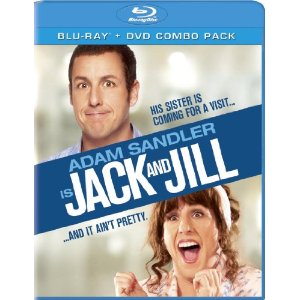 Some movies are so bad that they must be analyzed and examined. It seems imperative to the intelligence of humanity to discover what went so terribly wrong and take every precaution to prevent it from occurring again. Happy productions have gotten quite lazy over the last few years, though Jack and Jill sinks to new levels of low. Nearly everyone involved only seems to be halfway committed to their roles, almost knowing how ridiculous the whole concept is from the start. If I put as much effort into this review as they did the film, I would have no need to write further.
If possible, the person who seems to be least committed to the concept is Adam Sandler. This is the poison which spreads throughout the entire film, because Sandler is in the two largest roles of the film. As Jack Sadelstein, Sandler is dialing in the frustrated family man routine. The manner in which the film’s screenplay is written never fully explains his anger properly, making him an unlikable protagonist. His attitude is mostly directed at his visiting twin sister, Jill (Sandler in drag). This performance is a lazy and irreverent portrayal of a tough woman from the . Mostly he just gives her a speech impediment and a slightly higher octave than Jack.
Besides being bad, the story for Jack and Jill just gets weird. Al Pacino has once again sold out to make any film that he is wanted for, but his odd addition to the film adds more carnage to the train wreck. Pacino plays himself, and throughout the course of the film Jack is trying to get him to make a Starbucks commercial. Pacino is more interested in dating Jill. These are the unbelievable and ridiculous moments that make up the otherwise easily predictable storyline that is Jack and Jill. Oh yes, and Katie Holmes is useless thrown into the cast as Jack’s wife.
The Blu-ray includes exclusive featurettes, including the one on the Royal Caribbean cruise, which is featured like a commercial during a portion of the film. Also included are some deleted scenes which are even less humorous than the film, a blooper reel which is mildly funny at moments, and two additional featurettes. The better of the two is about the film’s more impressive cameos, whereas the other is just about the cross-dressing storyline.