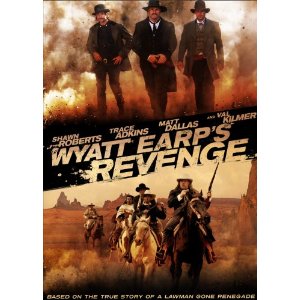 Another poorly constructed western makes its way onto home video, with little more than a whimper before dying on the shelves among so many others. Wyatt Earp’s Revenge only has a small role played by Val Kilmer to help it stand out amongst the rest of the poorly made westerns on home video.
Kilmer barely appears as an older Wyatt Earp, reflecting to a young man about his past and an early moment when he assembled a posse to avenge the death of a woman he loved. Following the culprits on a murder spree from to , Wyatt Earp and his crew of lawmen hunt the men responsible down. There is plenty of average action, though plenty more of the sub-par acting.
Starring Shawn Roberts (Resident Evil franchise) and country music artist Trace Adkins (The Lincoln Lawyer), it is not surprising to see Val Kilmer pushed into the credits. With his role as Doc Holiday in , he will always find work in a western, just like Robert Englund could always find something in the horror genre.
The DVD special features include a “Riding Along with Wyatt Earp” featurette.