The Flag of Iron Blu-ray Review 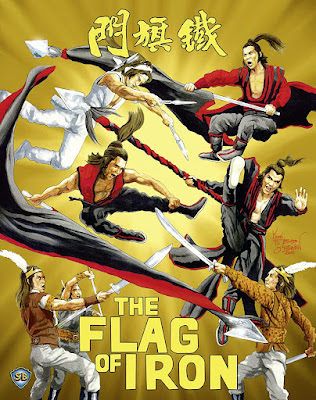 For The Flag of Iron, director Chang Chen brought back Chiang Sheng, Philip Kwok, and Lu Feng from his previous film, The Five Venoms (1978). Many of the actors who would become known as the ‘Venom Mob’ were trained in the highly acrobatic Chinese opera and skilled in the use of martial arts weapons, creating a carefully choreographed spectacle within their kung fu films, especially when directed by Chang. Anyone who doubts the similarities between dance and martial arts needs look no further than The Flag of Iron for proof of the connection. Even when brutally violent, there is a graceful beauty to the action of Chang’s film.

Although the plot is pretty generic and mostly just an excuse to set up a number of elaborate fight scenes and creative deaths, The Flag of Iron follows a betrayal within a clan of martial artists. When the leader of the Iron Flag Clan is killed in a conflict against the rival Eagle Clan, they retaliate by eliminating their enemy. While the eldest brother Tsao Feng (Lu Feng) takes over the Iron Flag clan, Lo Hsin (Philip Kwok) takes responsibility for the slaughter and is forced to go into hiding. When he emerges years later, Brother Lo discovers Brother Tsao has corrupted the clan, and may have played a part in the death of their original leader.

Brother Lo is forced to join forces with the hired assassin responsible for the clan leader’s death, a fighter known as The Wanderer (Lung Tien-Hsiang) with a clear moral code he was tricked into betraying. The two fighters realize that they stand little chance of defeating Brother Tsao on their own and devise a plan to take him out. This leads to an inevitable showdown, which puts the skills of the performers on display.

After an explosive first act in which Brother Lo must fight off a series of assassins sent to eliminate him, the narrative of The Flag of Iron drags a bit. The second act becomes too preoccupied with the orchestration of a plot the audience knows will inevitably result in a fight anyway. But once the fighting finally does begin, Chang fills the narrative with creative death and unique weapons. The flag weapons the clan are named after make for one of the most awe-inspiring sequences of choreography, sometimes resembling a dance more than a battle.

The Blu-ray release of The Flag of Iron from 88 Films gives the film wonderful treatment, from the high-definition presentation remastered from the original 35mm negatives to the special features in the package. The release comes with a limited edition slipcase with new artwork from R.P. ‘Kung Fu Bob’ O’Brien, which is also included on one side of the reversible sleeve. The other side contains the film’s original Hong Kong poster artwork. The package also comes with a double-sided foldout poster, and a booklet with screenshots and an essay “Red & Black Attack” from Andrew Graves.

On the disc itself is a new commentary track with Asian cinema experts Mike Leeder and Arne Venema, along with newly translated subtitles. The English dubbed version is also available. While the commentary includes a lot of fun tidbits, Leeder and Venema often get sidetracked into discussing kung fu elements beyond what is occurring onscreen, but that is forgivable given their passion for the subject.