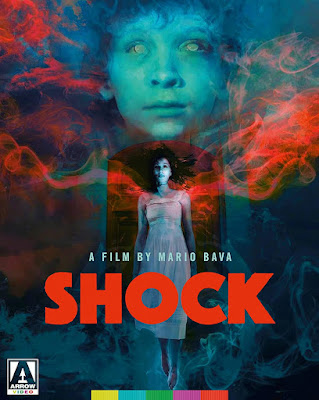 Mario Bava’s final film was only made with the encouragement of his son, Lamberto Bava, his filmmaker son who helped with the process of writing the screenplay for Shock (and may have had a hand in directing as well). While it isn’t the crowning achievement of his career, Shock was a worthy final film, a hybrid haunted house and possession film with a worthy mystery at the center.

Daria Nicolodi (Deep Red) stars as Dora, a distressed housewife who moves back into the home she once shared with her drug-addicted first husband before his demise. Dora appears happily remarried to Bruno (John Steiner), but her son named Marco (David Colin Jr.) begins to act strange upon moving back into their former home. The child becomes obsessed with the sexual activity between his mother and her new husband, and Dora begins to believe her first husband has possessed Marco.

There are incestuous undertones in the narrative, with the supernatural elements kept surprisingly subtle and ambiguous for much of the film. Audiences looking for Bava’s more straightforward or graphic horror may be wise to look elsewhere, but the dedicated fans will appreciate the gonzo approach to a simple story. I began to wonder if Roland Emmerich was influenced by Shock when he made Making Contact (initially released as Joey in Germany). Although Bava’s film has more adult themes and imagery, there are many similarities in the plot.

The Blu-ray release for Shock comes with a booklet insert with an essay on the film by Troy Howarth. The package has a cover with newly commissioned artwork by Christopher Shy, though the sleeve is reversable with the original poster as an alternative option. The film itself is presented in high definition 1080p, from a new 2K restoration of the original 35mm camera negative. Both the original Italian language version with newly translated subtitles and the English-language dubbed version are available. Shock was originally released as Beyond the Door II in the United States, as a way to capitalize on the minor success of Ovidio G. Assonitis’ blatant rip-off of The Exorcist.

The special features on the disc itself include the following:

-New commentary track by Tim Lucas, author of Mario Bava: All the Colors of the Dark.

-A Ghost in the House: A video interview with Lamberto Bava

-Via Dell’Orologio 33: A video interview with co-writer Dardano Sacchetti

-The Devil Pulls the Strings: A new video essay by author and critic Alexandra Heller-Nicholas

-The Most Atrocious Tortur(e): A video interview with critic Alberto Farina