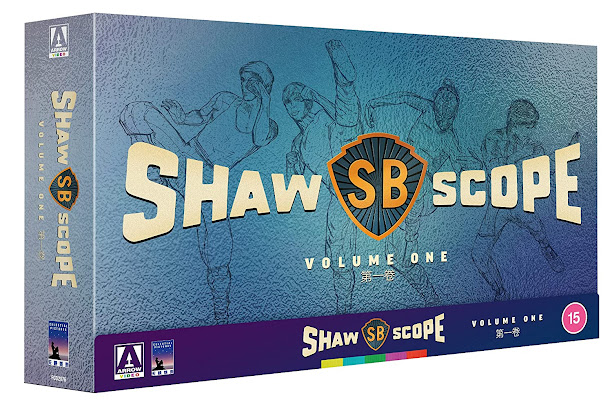 In 1925, three Shaw brothers named Runje, Runme, and Runde founded the Tianyi Film Company in Shanghai with a fortune the family had made in a textile factory, and in 1957, Runme and the youngest Shaw brother (Run Run Shaw) shifted focus to their sister studio in Hong Kong, establishing the “Shaw Brothers” company. With a 49-acre film studio named MovieTown which opened in 1960, they treated the studio like the textile factory, demanding much from performers who lived on the studio lot under constant supervision.

They made over 1,000 films until the studio suspended productions in 1987 and were best known for popularizing the martial arts film. This spectacular limited edition box set from Arrow Video includes twelve films released by the studio. Some of the films in this collection are kung fu masterpieces, while others are shoddy exploitation rip-offs of better movies, but collectively they represent the broad genre appeal of Shaw Brothers during this period.

Along with a stylish limited edition box set and extras for each film on the individual discs, the special features in the collection include the following:

-       Brand new 2K restorations by Arrow Films from the original camera negatives of King Boxer, The Boxer from Shantung, Challenge of the Masters, The Five Venoms, Crippled Avengers and Dirty Ho

Also known as The Five Fingers of Death in the United States, King Boxer stars Indonesian-born actor Lo Lieh as young martial arts student Chi-Hao, who is sent to study under master Shen Chin-Pei (Fang Mian) in order to defeat local martial arts tyrant Ming Dung-Shun (Tien Feng) in tournament battle. Released by Warner Bros. in America, Five Fingers of Death was the second-highest grossing kung-fu film of 1973 behind Bruce Lee’s Enter the Dragon. Quentin Tarantino lists this film as one of his top ten favorites of all time.

-       New commentary track by David Desser, critic and co-editor of The Journal of Japanese and Korean Cinema and The Cinema of Hong Kong

-       Hong Kong, US, and German theatrical trailers, and TV spots

The Boxer from Shantung

This 1972 kung fu film directed by Chang Cheh and Pao Hsueh-li stars Chen Kuan-tai as a boxer who leaves a life of poverty in Shantung to become a fighter in Shanghai. Dealing with corruption in the fighting world of the big city, the boxer must develop his skills in order to survive. The film was remade in 1997 with the title Hero.

Also known as 5 Masters Of Death, Five Shaolin Masters is a film by Chang Cheh centered on the historical conflict between the Shaolin monks and the Qing Dynasty. When five students escape the destruction of the Shaolin temple (continuing the plot from Shaolin Temple, included on the same disc as this film), they rejoin forces to get revenge on the traitor who sold them out.

Directed by Chang Cheh, Shaolin Temple is centered on the beginning of the conflict between the Shaolin monks and the Qing Dynasty. It serves as a loose prequel to Five Shaolin Masters. One of the monks is secretly working for the enemy and opposes the efforts to fight back against the oppression. The ensemble film was cast with several generations of successful martial arts stars, and has some impressively elaborate fight sequences.

Mighty Peking Man is essentially a campy Hong Kong King Kong rip-off, released following the Hollywood remake of the classic. Most notable for continuity errors and obvious wardrobe malfunctions (that one nipple just doesn't stand a chance against the exploitative work done by costume designer). The film’s dubbing also makes for extra unintentional humor, which is actually something of a selling point with an exploitation classic such as this.

Challenge of the Masters

Directed by Lau Kar Leung, Challenge of the Masters stars Gordon Liu as Wong Fei Hung, a young martial arts student who is forced to learn how to fight in order to combat bullying at school. Although his father is a kung fu master, Wong must enlist the help of a rival teacher when he refuses to teach self-defense skills to his son.

Based on the life of Hung hsi Kuan, Executioners from Shaolin is a 1977 kung fu biopic directed by Lau Kar-leung. It is a classic revenge narrative, once again beginning with a raid on the Shaolin Temple. A young boy is trained to enact vengeance on those responsible for the death of his father. The Wu Tang Clan famously sampled this film for one of their songs, as avid fans of kung fu and the Shaw Brothers.

-       Hong Kong and US theatrical trailers

With a plot involving a young man (Alexander Fu Sheng) who flees to San Francisco to escape gangs, only to discover trouble there also, Chinatown Kid feels like it could be inspired by Bruce Lee’s life, to some degree. It is also a more modern kung fu film in the collection from the Shaw Brothers. When the young man plays the gangs against each other, it also begins to resemble Yojimbo, and the many other adaptations of the iconic narrative.

-       New commentary on the international cut by Terrence J. Brady, author of Alexander Fu Sheng: Biography of the Chinatown Kid

Easily one of the more popular titles in the collection, The Five Venoms (or Five Deadly Venoms) is a 1978 kung fu film directed by Chang Cheh about the Venom Mob. Each of the five members have distinct fighting styles adopted from animal styles. Each of the animals influencing these fighting styles are taken from the Five Poisonous Creatures of Chinese folklore, the Centipede, the Snake, the Scorpion, the Lizard, and the Toad. This may be one of the most referenced kung fu films made by the Shaw Brothers.

Also directed by Chang Cheh, Crippled Avengers follows a group of men who are seeking revenge against martial arts master Chu Twin (Chen Kuan Tai), who crippled each of them. Oddly enough the evil kung fu master is violently lashing out after his own son is crippled in an attack. The victims must band together, so that they are no longer handicapped in their efforts for justice.

Heroes of the East

Also known as Challenge of the Ninja, Shaolin vs. Ninja and Shaolin Challenges Ninja, Heroes of the East is a 1978 martial arts film directed by Lau Kar-Leung and starring Gordon Liu. When Ho Tao (Liu) marries a Japanese woman, he unintentionally insults the family and must prove the value of Chinese kung fu against the martial arts of seven Japanese fighters.

-       New commentary track by Jonathan Clements, author of A Brief History of the Martial Arts

In this unique blend of comedy and martial arts, Gordon Liu stars as a prince who enlists a jewel thief (Wong Yue) to serve as his bodyguard when assassins are dispatched to dethrone him. Directed by Lau Kar-leung, Dirty Ho took a unique approach to the popular revenge narrative popularized by many Shaw Brothers kung fu films of the time.