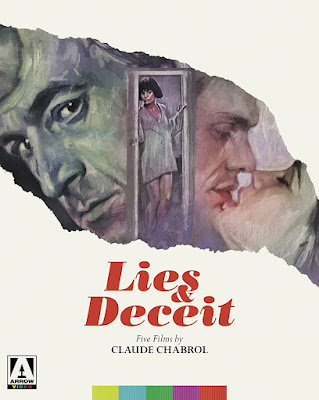 Claude Chabrol began as a film critic for the French film magazine/journal Cahiers du cinema before he got his start as a filmmaker, and his films have always been an intellectual playground because of this. While not as widely celebrated as some of his fellow critics-turned-filmmakers, Chabrol had the ability to blend arthouse sensibilities with genre narratives, often compared to Alfred Hitchcock in his approach and preoccupation with thrillers. The Arrow Video release of Lies and Deceit contains five classics from the French New Wave filmmaker, including Torment, Betty, Madame Bovary, Inspector Lavardin, and Cop Au Vin.

The special edition releases of the films for Arrow Video’s box set includes a plethora of extras on each disc/for each film, along with the 1080p high-definition presentation of the films themselves. Madame Bovary, Betty, and Torment are each presented with 4K restorations. Each of the films have introductions by film scholar Joël Magny, along with select-scene commentaries by Chabrol for each.

This 1985 crime film involves a small town in rural France that becomes the center of a murder investigation by Inspecteur Jean Lavardin (Jean Poiret). Lavardin arrives in the provincial town to solve the mystery involving the death of the local butcher  Gérard Filiol (Jean-Claude Bouillaud). Chabrol takes the police procedural and uses it to examine the small-town community and each of the characters within it.

-Claude Chabrol at the BFI, Chabrol on stage with film historian Ian Christie in 1994

Cop Au Vin was successful enough to inspire the sequel film, Inspector Lavardin, which brings back the detective (and actor Jean Poiret) from the first film to solve another mystery. This time a Catholic writer has been murdered, his body found on a beach with the word “pig” written on his back. To complicate matters even further, Lavardin discovers the victim’s widow (Bernadette Lafont) is a former lover of the inspector. This is one of the films that has earned Chabrol comparison to Hitchcock, as well as noticeable influences from Orson Welles.

Based on the 1857 novel Madame Bovary by French author Gustave Flaubert, Claude Chabrol’s 1991 release of Madame Bovary was not the first adaptation, nor would it be the last. Set in 1950s Normandy, the narrative follows Emma Bovary (Isabelle Huppert), a beautiful but restless young woman who fantasizes of a more exciting life, and eventually creates one with the drama caused by her behavior. The film was nominated for the Golden Globe Award for Best Foreign Language Film as well as for the Academy Award for Best Costume Design, though it did not win either.

When he wasn’t attempting to imitate the murder mysteries of Alfred Hitchcock, Chabrol was often focused on the depiction of upper-class lifestyles, and Betty (1992) is a perfect example of this preoccupation. The protagonist and title character, Betty (Marie Trintignant) is an amoral woman whose selfish actions are only outdone by the cold calculated reactions from the bourgeois family she has married into. We join this protagonist behaving unsympathetically, over-indulging in liquor, cigarettes, and men in various bars when a sympathetic older woman named Laure (played by Chabrol’s ex-wife, Stéphane Audran) takes Betty under her wing.

-New interview with Ros Schwartz, the English translator of the Georges Simenon novel on which the film is based

If Betty was about a coldly selfish spouse, Torment is about a husband that fears his wife is hiding the same tendencies, essentially only having her youth and beauty as evidence. A young Emmanuelle Béart is absolutely breathtaking as Nelly, though it is François Cluzet who carries out the psychological torment of the title with his performance as the husband, Paul. Paul and Nelly run a modest country hotel together, but his paranoia over slight flirtations leads to a debilitating preoccupation that threatens to destroy both their business and marriage. Cluzet works hard to portray this internal conflict of a man unable to silence the obsessive distrust, whereas Béart is little more than a pristine prize for Paul to hoard from the perceived envy of other men.

-Theatrical trailers and image galleries for all films