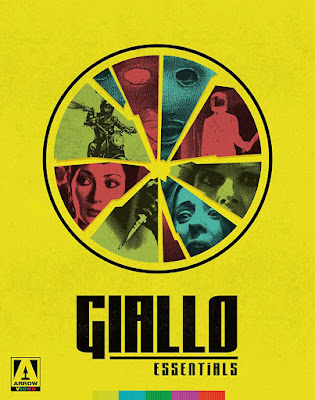 Before slasher films exploded in popularity in the United States, Italy had a wave of horror-driven thrillers known as giallo films, named after the often-yellow covers of the popular crime novels the movies draw their inspiration from. The word ‘giallo’ itself means yellow in Italian, which is why the second volume of Arrow Video’s Giallo Essentials Collection is so fittingly colored as such. The first volume was in a red box, while the second is given a bright yellow box to contain the three films inside. Stunningly presented in high definition from a 2K restoration, these Italian crime thriller classics have been given the treatment they deserve, including a handful of extras for each. There is currently no better way to watch these films, and no better treatment of the exploitation classics.

The limited edition content includes the original lossless mono Italian and English soundtracks, for purists and the subtitle-averse alike. Each of the individually packaged films contained in the box set also have reversible sleeves, with the option of either the original poster artwork or newly commissioned art by Adam Rabalais and Graham Humphreys.

What Have They Done to Your Daughters? 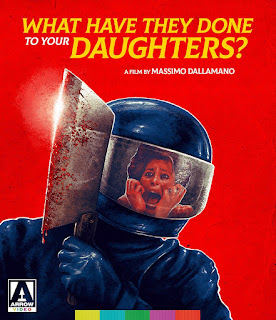 When Commissioner Silvestri (Claudio Cassinelli) and his assistant Deputy Attorney Vittoria Stori (Giovanna Ralli) investigate the death of a pregnant teenage girl, they uncover an underage prostitution ring frequented by the wealthy and elite of Italy. They must solve the crime before a motorcycle-riding killer eliminates all of the evidence. As the giallo films waned in popularity, they were often combined with other popular genres, and What Have They Done to Your Daughters? is also a bit of a poliziottesco film, police procedural crime films that were increasingly successful at the time. At times you can sense the shift in Italian culture, as the focus is more on the poliziottesco than the giallo aspects.

The special features on What Have They Done to Your Daughters? include:

-A commentary track by Troy Howarth, author of So Deadly, So Perverse: 50 Years of Italian Giallo Films

-A video essay by Kat Ellinger, author and editor of Diabolique Magazine

-An interview with composer Stelvio Cipriani

-An interview with editor Antonio Siciliano 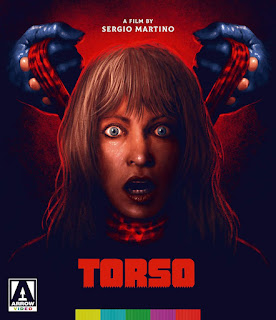 Directed by prolific giallo director Sergio Martino, Torso is considered to be a precursor to the slasher genre, finding popularity in the American grindhouse circuit after initial success in Italy, often shown with The Texas Chainsaw Massacre. The 1973 film follows the search for a masked killer with a psychosexual disorder who is targeting college students as his victims. College student Jane (Suzy Kendall) decides to leave the university town for a remote country villa with her friends, only to discover that the killer is amongst them.

The special features for Torso include:

-Both versions of the film: the 94-minute Italian cut and the 90-minute English release.

-Audio commentary by Kat Ellinger, author of All the Colours of Sergio Martino

-A video interview with director and co-writer Sergio Martino

-Video interview with filmmaker and the director’s daughter, Federica Martino

Strip Nude for Your Killer 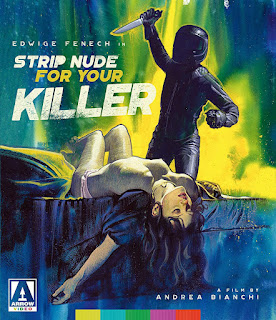 Another killer wearing a motorcycle helmet terrorizes victims following the death of a model during an illegal operation. When employees at the modeling agency are targeted, photographer Magda (Edwige Fenech) and her boyfriend Carlo (Nino Castelnuovo) set out to figure out who the killer is. While What Have They Done to Your Daughters? combined the giallo with police procedural, Strip Nude for Your Killer instead spices the genre up with softcore sex scenes and increasingly graphic murder scenes.

The special features for Strip Nude for Your Killer include:

-An audio commentary by Adrian J. Smith and David Flint of HORRORPEDIA.com

-Sex and Death with a Smile: a video essay by film critic Kat Ellinger on star Edwige Fenech.

-A Good Man for Murder: an archival interview with actor Nino Castelnuevo

-The Blonde Salamander: a video interview with actress Erna Schurer

-The Art of Helping: a video interview with assistant director Daniele Sangiorgi

-Jack of All Trades: a video interview with actor and production manager Tino Polenghi