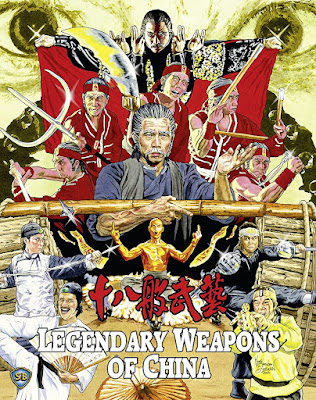 What’s surprising about Legendary Weapons of China, at least in comparison to most Hollywood films, is the fact that the younger martial artist performers in this film don’t end up being the hero. Or the villain, for that matter. By the time the final fight comes around, the young threat played by Gordon Liu quietly excuses himself. And the original protagonist (however confused and misguided he is for much of the film), steps back from the final fight. It comes down to the oldest member of the cast, who also happened to be director Liu Chia-Liang.

The narrative centers on former martial arts master Lei Gung (Lui Chia-Liang), who has abandoned his kung fu order to be a simple woodcutter. The other leaders of the order determine anyone who knows as much about their practices can’t remain alive, and dispatch assassins to take him out. Because the assassins each come from different groups of the order, they don’t know each other, leading to a series of mistaken identities. Despite belonging to the order, Fong Siu-Hung (Kara Wai) disguises herself as a man and sets out to sabotage the efforts to kill Lei Gung made by Ti Hau (Hsiao Ho) and Ti Tan (Gordon Liu).

Although director Lui Chia-Liang primarily focused on the realistic depiction of martial arts in his films, and indeed includes a final fight that could double as an exhibition of kung fu skills, Legendary Weapons of China also includes elements of Taoist Maoshan folk magic in the narrative. The reason Lei Gung gives for leaving behind his martial arts order is their experimentation with magic to combat Western weapons, in particular guns. Though magic is used throughout the film, the primary focus by the end is the skillful ability to use the 18 weapons referred to in the title.

The special edition Blu-ray release of Legendary Weapons of China features a high definition 1080p presentation of the film in its 2.35:1 aspect ratio, with both the English-language dubbing and the original Mandarin soundtrack with a new translation for subtitles. The package comes with a booklet containing still images and an essay appreciation by Andrew Graves. There is also a foldout reversible poster with the original theatrical Hong Kong poster on one side, and new artwork from R.P. “Kung Fu Bob” O’Brien on the other. These are the same options of the reversible sleeve, allowing the consumer to choose which artwork is displayed on the package and which is on the inside with the disc.