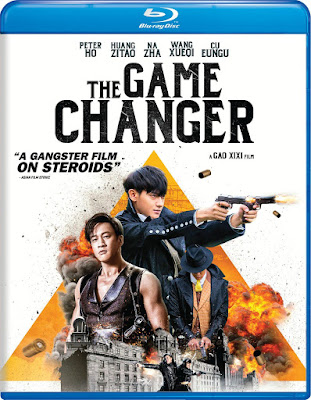 Like many Chinese gangster films, the narrative is tied to a bond between two men. Based on the television series “Shanghai Bund,” this 140-minute adaptation takes place in the underworld of 1930s Shanghai. Zi hao (Peter Ho) is a political prisoner after being caught in a protest as a student, stuck in jail until gangster Fang Jie (Zitao Huang) crashes into his cell during a prison escape. Fang Jie introduces his prison friend to Mr. To (Xueqi Wang), the head boss of a crime family, who invites Zi hao into his operation.

The film oscillates between typical gangster action and heavy melodrama typical of soap operas, include several love triangles. Fang Jie is in love with Mr. To’s daughter, To Fong Fong (Coulee Nazha), but she is in love with Zi hao, who still pines for a lost love named Tang (Cha Joo Hyeon), now married to Mr. To. The action is a welcome relief from the silliness of the coincidental romantic entanglements, even if it ends up being even more difficult to believe. This is likely due to the fact that there is hardly a single shot without CGI in the action sequences, paired with the strange decision to give the heroes near superhuman abilities with guns and vehicles.

The action scenes are so overdone and lengthy that I found myself wondering what had even started the violence long before it had completed. There are ridiculous car chases early on in the film, and the climax feels like it belongs in a Rambo movie. The entire thing would be hilarious if it didn’t take itself so seriously. To make matters worse, the effects are always just shy of convincing, so that the entire endeavor reeks of artifice on top of feeling absurd. While it is entertaining in a distracting sort of way, little of The Game Changer has any lasting impact despite its over-stuffed 133-minute run time.