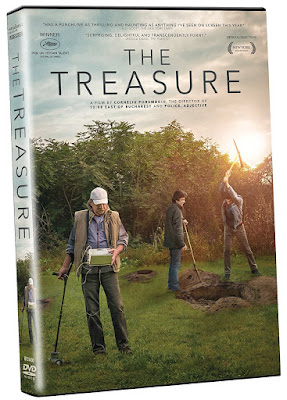 The film starts by showing us the daily life of a modern Romanian family, focusing on a husband and father named Costi (Toma Cuzin). Although their family is making enough to get by, Costi is willing to risk debt when presented with an opportunity to find riches buried in his neighbor’s family plot. While reading “Robin Hood” to his young son one evening, his neighbor Adrian (Adrian Purcarescu) stops by with an urgent request to borrow money. After Costi informs the neighbor that he has no money to spare, Adrian leaves, only to return moments later with a proposal. If Costi agrees to provide the money to rent a professional metal detector, he will split the treasure that is rumored to be buried on his family land.

Despite sincerely lacking the funds, Costi begins to make arrangements to raise the money. He is so eager to find riches that Costi begins to risk what he has for what they might find. This includes putting off paying bills as well as lying to his boss in order to spend the work day finding the lowest price for a metal detector. When he is caught by his boss, Costi is forced to lie a second time about having an affair when his boss doesn’t believe his explanation about buried treasure, in one of the film’s few scenes of obvious humor. This is the kind of uncomfortable humor that Romanian cinema is best known for, though those who are unaccustomed to the style may struggle to see what is so funny.

The awkward (and occasionally confrontational) humor continues on the actual hunt for treasure, which takes up a large portion of the run-time. Costi and the endlessly pessimistic Adrian are joined by metal detector operator Cornel (Corneliu Cozmei), who doesn’t appreciate the negativity, which becomes directed at him when there is trouble with the equipment and the discovery of the treasure does not happen quickly enough. Costi remains focused on digging, stopping only to play mediator between the two bickering men. Underlying the entire endeavor is the fact that the government’s “cultural heritage” rule may mean a majority of what they find could be confiscated, adding in a bit of scathing social commentary to the mix.

There is a mild punchline to end the film, fitting for the anticlimactic nature of the narrative. The entire experience is somewhat underwhelming, especially for those unaccustomed to the pace and style of Romanian cinema, enhanced even more by our own expectation of a story involving buried treasure. Even the prize that is discovered subverts expectations, especially those of Costi’s Robin Hood-loving son. Buried within this film is social commentary in the form of dark comedy. While the commentary may be fairly clear, even to those unaware of Romania’s tumultuous history, many viewers may find that they have to dig deeper than expected to find the humor.