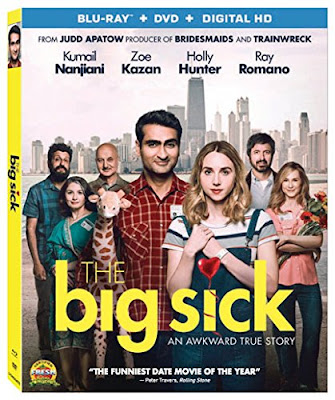 This is also yet another film produced by Judd Apatow with a comedian starring in a role as a struggling comedian, though it is easily forgivable due to the true aspects of the story. Besides that, The Big Sick has plenty more to offer than the comedy provided by struggling comedians. The relationship between Kumail (playing himself) and Emily (played by Zoe Kazan) begins like many other romantic comedies, with a heavy dose of clever banter after a cute meet cute, but the film shifts gears in a surprising second act. First, the couple breaks up before the film is even halfway finished, because Kumail won’t tell his traditional Pakistani family that he is dating a white woman. Then, as if this weren’t conflict enough, Emily comes down with a mysterious illness that threatens her life enough for doctors to decide a medically induced coma is the best option.

Despite the fact that they are no longer dating, Kumail feels a desire and obligation to be at the hospital while the doctor’s look for answers. After breaking up due to his unwillingness to be honest with his parents about their relationship, Kumail is forced into close proximity with Emily’s parents, and quickly discovers that she was not nearly as secretive with them about the nature of their relationship. Emily’s mother, Beth (Holly Hunter), is close enough to her daughter to have adopted her resentment about the way their relationship ended. Emily’s father, Terry (Ray Romano), is a bit more accepting, if only due to the mistakes that he has made in his own relationship. Despite not wanting to meet her parents, Kumail soon finds himself getting to know Beth and Terry incredibly well as the three of them wait for news about Emily’s health, which also forces him to reevaluate the way that he has been keeping his parents in the dark about his own life.

The Big Sick works because it feels real. The characters are full of flaws as well as admirable qualities, and we learn to love both over the course of two hours. The situations in the plot are equally heartwarming and heartbreaking, resembling real-life far more than your average romantic comedy. It may exist within the plot structure of the genre, but the writing and the characters feels so sincere that each scene still feels like an unexpectedly wonderful surprise. Adult comedies don’t have to have raunchy humor like Rough Night or Girls Trip (or several early Apatow productions); often it is far more rewarding to just have sophisticated themes and well developed characters, which The Big Sick has in spades.

The Blu-ray release of The Big Sick includes a plethora of extras, keeping in the tradition of many Apatow productions by including the improvisational alternate scenes/lines in the additional footage of the special features. Director Michael Showalter has a rich history of improvisation as an actor, and as a director he allows his cast the freedom to make the well written characters feel even more personalized through this approach. This dynamic is quickly apparent in the commentary track with filmmaker and cast members. There is also a making-of featurette and a featurette about the real love story between Kumail and his wife that inspired the film. As well as the extras on the Blu-ray disc, this package also comes with DVD and Digital HD copies of the film.