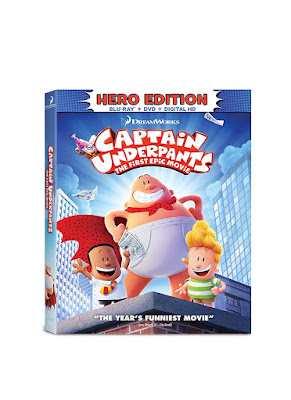 The protagonist of the film isn’t actually Captain Underpants, and he isn’t even a real superhero. The film instead focuses on two fourth grade troublemakers whose sense of humor has bonded them as best friends since their first class together. George (voiced by Kevin Hart) and Harold (Thomas Middleditch) are the masters of pulling pranks at their school, despite the strict rules enforced by their humorless principal, Mr. Krupp (Ed Helms). In an act of desperation after getting caught pulling one of their legendary pranks, George attempts to hypnotize the principal with a prize found in a cereal box. When it inexplicably works, the pair find that they have complete control over their greatest adversary and decide to turn him into the superhero of the comic book they co-wrote together.

With the snap of their fingers, the strict Mr. Krupp suddenly thinks that he is Captain Underpants, an underwear-wearing superhero with limited intelligence and unlimited enthusiasm. All it takes is a splash of water to change him back to normal, but the kids know that they will be punished once they do, so Captain Underpants begins to take over the duties of principal for Mr. Krupp. The irony of this is that the incompetence of Captain Underpants leads to the hiring of a new teacher named Professor Poopypants (Nick Kroll), who becomes the villain for our hero to face as he puts in motion a plan to end all laughter, which is something Mr. Krupp would certainly be in favor of.

The animation in Captain Underpants is somewhat crude, as are the toilet humor jokes, but that is kind of the point. The enjoyment of the film comes from its refusal to take anything, including itself, seriously. It is a film about the bonding power of humor, though without any high-minded pretensions behind its theme. Fun is the goal, and little kids especially will likely appreciate this enterprise. Adults may not go out of their way to see it, but parents will find themselves pleasantly amused by the innocuous silliness of the entire endeavor.

The Blu-ray release is not entirely necessary, due to a rudimentary animation style, but this Hero Edition comes with plenty more than just a high definition presentation. Stacked with special features, this release also comes with DVD and Digital HD copies of the film. The extras include a fantastic mixture of promotional material, behind-the-scenes content, and fun stuff for kids. Even the featurettes are a continuation of the film’s silliness, including Captain Underpants’ guide to being a hero, and Professor Poopypants’ guide for being a villain. There is even a motion comic taken from the comic written by our heroes in the movie. Additional content is also included over 10-minutes of deleted scene, though the animation is unfinished on most. There are also a series of Q&A interviews with the cast and an inexplicable video with George and Harold replaced by sock puppets. The last area of extras is the musical section, with lyric videos of songs by both Weird Al Yankovic and Andy Grammer.