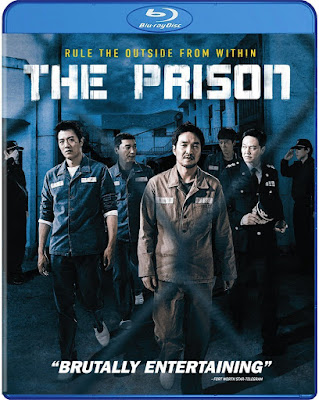 When former police inspector Yu-gon Song (Rae-won Kim) is disgraced and sent to prison for a hit-and-run, among other crimes, he discovers a secret criminal underworld hiding in plain sight. Career prisoner Ik-Ho Jung (Seok-Kyu Han) is the head of a syndicate of prisoners given unbelievable power and freedom by the guards. Even the warden is under the control of Ik-Ho, who is using the prison and his lackeys to smuggle drugs and commit a number of crimes without detection. With the help of the authority figures in charge, the prisoners even leave captivity at night to commit acts of violence. The prison is less a place of captivity as it is a cover for the gang of opportunistic thugs to build a criminal empire undetected.

Yu-gon quickly proves himself a capable member of the prison, and his refusal to back down to the thugs angered by his existence is quickly noticed by Ik-Ho. This leads to his initiation into the prison gang, much to the irritation of several of Ik-Ho’s other henchmen, who don’t all believe the former cop can be trusted. The direction of the narrative and the motivations of Yu-gon are kept hidden for much of the run-time, though they provide little surprise even when finally revealed. As clever as the initial premise of the film is, it still ends up being fairly predictable.

The narrative is surprisingly familiar, but even this could be forgiven in crime movies that also provide innovative action in the form of either fight choreography or camera work. The Prison provides neither in any significant way, keeping both the fights and camera work tied to realism with a cinema vérité style and haphazard fights that feel more chaotic than choreographed. This is not to say the film isn’t violent, but it relies on brutality rather than impressive skills. This is yet another way the film aligns far more with a gangster narrative than an action movie, even if there are numerous scenes of fighting.

Enjoyably entertaining as The Prison is, it never seems to fully take advantage of the clever premise. There are multiple characters in the plot, though few are fleshed out enough to truly matter. There is plenty of violence, but little of it is as much fun as action fans may hope. Even the drama feels a little unearned, mostly due to the secretive nature of the characters, which doesn’t allow much room for character development. I enjoyed The Prison, but would likely choose any number of other prison films or South Korean crime movies before a repeat viewing of this one. The Blu-ray is without special features. There are some stylish shots scattered throughout the film, but not nearly enough to demand a high definition viewing experience.