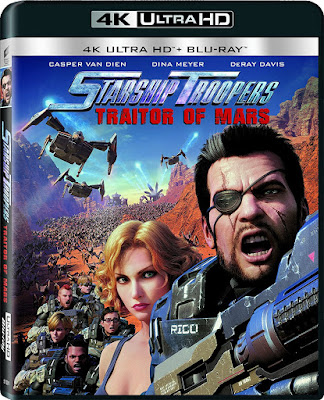 Not only are the actors returning, but so are the characters that they played. One is literally resurrected in order to have a place in the narrative, and multiple other characters return, even if the actors that once played them did not lend their voice. The most notable return is Johnny Rico (voiced by Casper Van Dien), the Federation trooper who was our protagonist in Paul Verhoeven’s original film. This time around he is protecting the colonized planet Mars from bug invasion with a group of recently trained recruits. As it is 20 years later, he is now a grizzled soldier with a raspy voice, but still likes killing bugs as much as ever.

Intentional or not, there is a bit of social commentary in the handling of the Mars occupants. For whatever reason, they have a reputation of being lazy and of little value to society. A group of them have been trained as Federation troopers, despite complaints that they are poor recruits. Some certainly don’t prove to be of much value on a mission, though others will prove themselves over the course of the film. When the Federation hears about the bug invasion on Mars, a certain segment uses the incident politically as reason to argue simply blow up the planet and all its inhabitants. They might as well mention placing a wall between Mars and Earth for all subtlety of the subtext.

Everything goes wrong on the mission, and it looks like even the Federation will be no help, so Rico is forced to fight with the men that he has. This is about as complicated as the story gets, even while adding in the ghost of Dizzy Flores (Dina Meyer). As per usual, the focus of the film remains on the killing of bugs. Very little new is added to the premise offered in the original film, even where the attacking monsters are concerned. If anything, the films have become even tamer, with the violence now feeling perfunctory. This is disappointing, because the animators have clearly gone to a lot of trouble to bring to life this uninspired story.

If the only reason to see Traitor of Mars is the animation, 4K Ultra HD should be the only way to watch it. The details in each of the characters, alien bugs, and all of the background is astounding, even if humans still have a tendency to look soulless in the eyes. Fortunately, there isn’t much reason to ever look at the characters’ eyes for long, because the film provides so much else to see. And by “so much else,” I primarily mean bugs being killed. The violence isn’t too graphic, and is actually quite sparse for a Starship Troopers film, but the scenes of action are especially impressive in 4K with 7.1 Dolby TrueHD audio.

The 4K release also comes with a Blu-ray copy of the film, which comes with a number of extras. The 4K disc only has the film. The special features include five featurettes, deleted scenes and a photo gallery. Three of the featurettes are about the franchise and are titled “Expanding the Universe,” while the other two look specifically at the details of this particular entry.