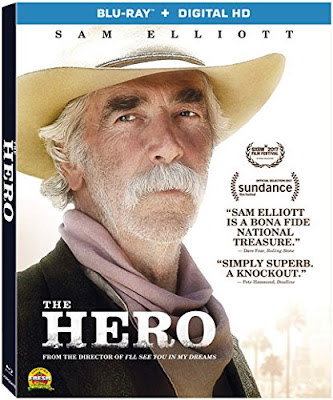 Elliott stars as Lee Hayden, a Western movie star best known for playing a legendary TV role. Having spent much of his career struggling to make anything half as good as his most iconic part, Hayden is defeated by life long before receiving the news that he has cancer. In a predictable development of events, the news of his impending mortality causes Hayden to put his priorities in order, though not before spending a period in denial by turning to excessive drinking and drug use. Even with his fairly successful career as an actor, Hayden has a great deal of regrets that must be addressed, with the fractured relationship with his daughter (Krysten Ritter) at the top of the list.

Had the film spent a majority of its time on the reconciliation between celebrity and offspring, I would have been quick to point out the similarities between this and a number of recent films. Even though music was what gave them their fame, both Danny Collins and Ricki and the Flash had protagonists with similar goals. The Hero, however, pushes this significant storyline to the background for much of the film. Before he can repair the relationship with his daughter, Hayden must come to terms with his shortcomings himself, which is what much of the film is spent on. In order to accomplish this, Hayden addresses his mortality and humanity in two ways; first he attempts to extend his legacy by making one more great movie before he passes, and secondly he comes to terms with the fact that he wants to keep living by starting a relationship with a young woman that makes him feel alive again.

Introduced by their mutual drug dealer (Nick Offerman), Hayden meets a young comic named Charlotte (Laura Prepon) who admits to having a thing for older men. This is something of an understatement, considering she is barely older than Hayden’s daughter, but he still finds himself drawn to her. This becomes an inevitable conflict, because looking forward to a future with someone new gets in the way of Hayden’s plans to prepare for death. Even though the relationship between Hayden and Charlotte is never altogether convincing, the conflict that it causes his character allows for Elliott to wrestle with emotions onscreen that consistently feel sincere.

The Blu-ray release comes with a Digital HD copy of the film, as well as a few extras on the disc itself. The highlight of the special features is a commentary track with Haley and Elliott, though there is also a photo gallery from the production.