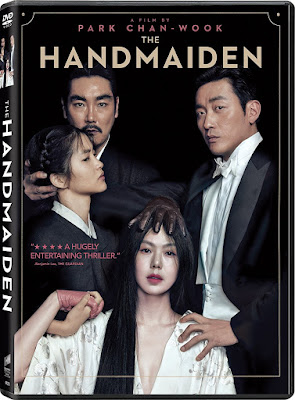 I refuse to watch dubbed foreign films if subtitles are available, but the cinematography and art direction is so rich in Chan-wook Park’s The Handmaiden that I found myself wishing that I understood Korean and Japanese. Torn between reading the text in order to follow the narrative and the captivating pull of magnificent images, The Handmaiden kept my eyes glued to the screen for much of the running time, afraid to miss a thing. Park has long been a filmmaker known for his excesses, and his latest is no exception, though he has somehow managed to make a film that feels both indulgent and restrained, often at the same time. The Handmaiden is overflowing with emotion and passion, but that never gets in the way of some of the director’s most precise and thoughtful filmmaking in years.

Adapted from Sarah Waters’ novel, “Fingersmith,” The Handmaiden shifts its narrative from class-divided 19th century England to 1930s Korea, under Japanese colonial rule. While there are still issues of class dealt with in the tale, the complex relationship between Koreans and the occupying Japanese adds layers of meaning on top of an already rich narrative. A lowly young Korean woman named Sook-Hee (Tae-ri Kim) is sent to work as the handmaiden for Lady Hideko (Min-hee Kim), a Japanese heiress living in a secluded estate with her controlling uncle, Kouzuki (Jin-woong Jo).

The narrative of The Handmaiden unfolds like an artichoke, layers of prickly covering eventually revealing the heart at the center of the story. What initially seems an ordinary set-up dealing with class and cultural differences, eventually reveals itself to be a complex plot of betrayal, with a love story at the center. We first discover that Sook-Hee is not as innocent as we first imagine, and that her placement under Lady Hideko is far from coincidental. Secretly given the task of talking up a con man disguised as a suitor named Count Fujiwara (Jung-woo Ha), Sook-He unintentionally finds herself falling for Lady Hideko instead.

The film is told in sections, each one revealing new information about the characters, providing the unexpected surprises and twists that Park’s films often contain. While tamer in terms of violence, Park also retains his propensity for shocking material through the sexual encounters in the erotic thriller. In the filming of the sex scenes, Park never shies away from the intimacy of the moments, but he also choreographs them in such a way that body placement restricts the amount of actual nudity. These are scenes which are emotionally raw without ever resorting to physical exploitation. The decision to remove all men from the set on the day of filming (including Park), as well as limiting the need for any unnecessary bodies in the room by implementing a remote camera, gives these sequences intimacy without the prevalence of the male gaze.

Filmmaking alone allows endless praise for The Handmaiden, though the story itself is also surprisingly engaging despite a lengthy run-time. Fans of Park’s earlier work (particularly his revenge trilogy) may be disappointed to find this to be one of his tamer narratives in terms of content, though this is clearly one of his strongest filmmaking efforts. And even though the use of violence is limited and far less graphic than in past projects, there are still many signature Park moments which caused this reviewer to cringe. Park is a filmmaker with an uncanny ability to turn a narrative full of exploitation and escapism into something wholly artful and intelligent.

Considering the wide appeal of Park’s work and the critical praise that this film received upon its theatrical release, I was shocked to find that the DVD release contains absolutely no special features. This comes after the decision to release the film on DVD, but not on Blu-ray. The Handmaiden is a richly designed film, full to the brim with visual spectacle in the form of costumes, sets, and cinematography. These should have been celebrated in high definition, not to mention extras that highlight the hard work. While I must commend Amazon Studios for releasing this film in the United States, it is a film which deserves far better treatment than this.