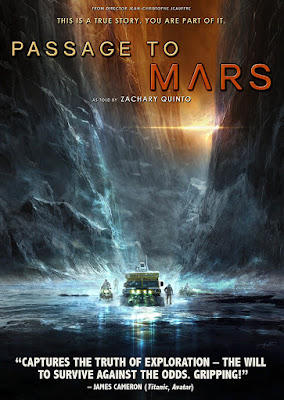 Although there is a definite disconnect from the mission in the Arctic and its intended purpose, especially when considering how different the elements are in each location, this is not the only reason Passage to Mars is a failed experiment. As a mission, there are enough problems to keep the documentary engaging, but this also prevents them from being successful in their task. But even harder for me to accept than the decision to make a movie about failure was the filmmaking methods themselves.

The narration for Passage to Mars is taken from the actual journals from the NASA Arctic expedition, written by the director, Pascal Lee. Here’s where the film gets unnecessarily convoluted, because even though we see the actual Lee in the footage of the journey, his journals are narrated by actor Zachary Quinto. While I understand the expected appeal of having the actor who plays Spock in the latest incarnation of the Star Trek franchise do the narration, it is unnecessarily confusing to have a voice that does not match the face we see throughout the film. This confusion seems a high price to pay just in order to claim a celebrity narrator.

Beyond the confusion of the narration and the oddly disjointed way the film jumps between CGI of Mars and documentary footage of the Arctic mission, Passage to Mars is quite simply not as exciting as the expedition first promises. While there are many speedbumps along the way, the mission rarely feels as dangerous or urgent as filmmaker Jean-Christophe Jeauffre seems to suggest. At the very worst, when things go wrong they are forced to wait in the cold environment until the problem can be solved, often within the comfort of the cutting-edge vehicle they are testing. Even when the mission must be delayed repeatedly, the decision is made without much urgency. And considering snow ends up the largest adversary along the way, it seems uncertain whether this mission will actually prove helpful on a planet covered in dust.

The DVD release of Passage to Mars includes over 90 minutes of extra footage in the special features. Somehow this speaks to the lack of focus of the documentary as much as it is an asset for consumers who are interested in the subject matter. The extras often go into more details than the film itself, with behind-the-scenes footage and a director’s commentary among other inclusions.
Entertainment Value: 3.5/10
Quality of Filmmaking: 4.5/10
Historical Significance:  3/10
Special Features: 7/10