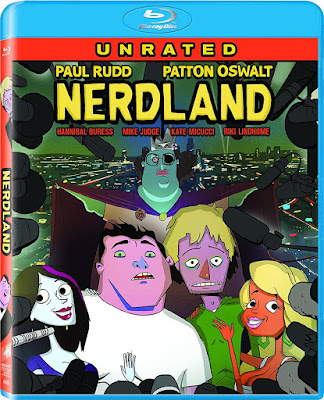 For a film about an aspiring actor and screenwriter deciding they will do anything it takes to become famous, Nerdland seems a poor title choice. Even with one of the minor characters serving as the ultimate pop culture geek, the focus of the narrative is on fame rather than being a nerd. Neither of the main characters even seems intelligent enough to wear that moniker. John (voiced by Paul Rudd) comes closest as an actor who dabbles in internet hacking, whereas his screenwriter roommate, Elliot (Patton Oswald) is essentially just a typical Hollywood slacker. Only when they briefly visit the owner of a collectible shop known as the “king of nerds” (Hannibal Buress) does the title briefly fit.

John and Elliot are tired of waiting for fame to come as they approach their 30th birthdays, so they decide to take matters into their own hands. In a satirical approach to fame which has been taken many times before (Jimmy Hollywood, Cecil B. Demented), John and Elliot decide that infamy is better than nothing, and set out to make a name for themselves by any means necessary. When all of their efforts to become known in the entertainment industry seem too difficult, they switch to any form of fame available.

After unsuccessfully attempting to become victims of police brutality, John and Elliot go from attempted victim to aggressor by deciding to go on a killing spree. When these plans don’t work, the pair inadvertently stumbles into notoriety by becoming the sole witnesses to a high profile crime that is the focus of the media. The episodic nature of the film makes it clear to see how this could have been released as a series of animated shorts or a TV series, though it mostly just feels unfocused as a feature film.

On top of changing directions several times throughout the film and having a narrative that is a watered-down rehash of familiar themes, Nerdland is quite simply an unattractive film. The animation is vulgarly drawn, both in the sense that it is full of questionable content, an unpleasing color palette, and unattractive character designs. Scenes filled with sleazy imagery ensures this is a film intended for adults only, including excessive nudity from random bare breasts to a running gag involving John’s hairy anus. Perhaps even more distracting than the crassness of the content is the decision to give the protagonists noses that are different color than the rest of their face. I spent half of the film wondering why John’s nose was purple, despite none of the minor characters having that odd frostbitten look.

The Blu-ray release of Nerdland is wholly unnecessary. Not only is the animation no less unattractive in high definition, there are no special features to speak of.