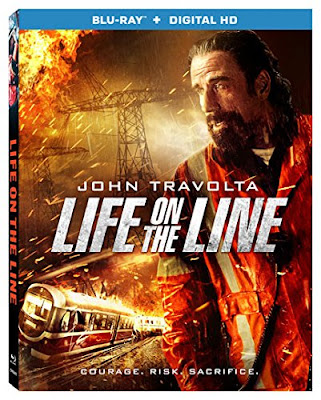 We are told from the beginning that the film is based on true events, but Life on the Line is also padded with an over-abundance of fictional sub-plots. In the end, the reality of the dangers of a job as a lineman are made clear by the film, but mostly Life on the Line feels like fabricated scenarios attempting to force an emotional response out of the audience. This begins with the very first scene in which a careless lineman in Texas named Beau (John Travolta) makes a mistake that results in the death of his brother. As if this were not enough, the fallen lineman’s wife is killed in a brutal car crash on the way to the hospital, leaving Beau as the only guardian for his young niece, Bailey.

The film then jumps forward in time to the point that Bailey (Kate Bosworth) is fully grown and in her early to mid-20s, despite being played by an actress in her mid-30s. Oddly enough, Beau doesn’t seem to have aged at all in the 15-year jump in the narrative. This is the kind of incompetent filmmaking that destroys an admirable homage that it was intended to be for fallen lineman. It doesn’t stop there, unfortunately. In order to show the perils of being a lineman, Life on the Line employs every unbelievable soap opera scenario it can think up, everything from cheating spouses and violent ex-boyfriends to late-night intruders and unexpected pregnancies. Some of these melodramatic moments don’t even include women in peril.

Bailey is struggling with her relationship to a man named Duncan (Devon Sawa), whose decision to become a lineman does little to impress Beau. At the same time, Bailey is aggressively pursued by another ex-boyfriend named Ron (Matt Bellefleur), whose only purpose in this film is to force dramatic situations on the protagonists, leading up to a ridiculous scenario that forces a lineman to make the ultimate sacrifice. But the loose connection to the linemen and electricity only comes after a series of ridiculous coincidences. First Bailey makes friends with a new neighbor (Julie Benz) and her husband (Ryan Robbins), who is preoccupied with suspicions of his wife’s infidelity.

Duncan makes an effort to win over Beau on the job, after failing to impress his alcoholic mother (Sharon Stone) with his life changes or the news that Bailey is pregnant. Beau doesn’t like Duncan, but this inevitably changes when they are forced to work together during a massive power outage that endangers many of the supporting characters. It is difficult to believe any of this actually happened, no matter how believable the dangers of the job may be.

The biggest problem of the movie is the script, which shoves its purpose down the throat of viewers, but that doesn’t excuse the many technical faults from scrutiny. There is essentially only one large scale disaster sequence and it is full of poorly rendered CGI fitting of this Canadian production. At least these shortcomings are over quickly, whereas the atrocious fake beards worn by the cast must be seen for the entire run time. And then there is the song the film is book-ended with, called “On the Line,” which couldn’t be any more on-the-nose.

This song by Fiona Culley and Darius Rucker is also featured in the Blu-ray extras with a music video. The special features also include a behind-the-scenes featurette with interviews from the cast and crew, as well as a trailer gallery. A Digital HD copy of the film is also included.