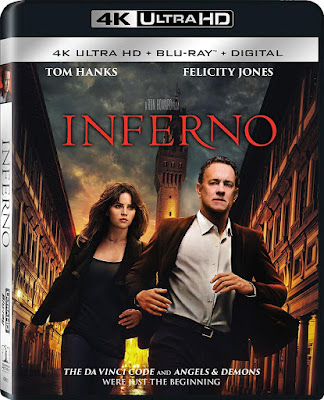 Adapted from the fourth book in Dan Brown’s series, Inferno strays away from the religious themes from the first two films, instead addressing the issue of overpopulation in the world. Langdon’s memory begins to return as he retraces his steps with the help of a doctor named Sienna Brooks (Felicity Jones), and he discovers a plot to release a virus that will wipe out a large portion of the population, as a way of saving all of humanity from extinction. This extreme reaction is part of a plan by a visionary named Bertrand Zobrist (Ben Foster), who is dies in order to keep his plan in place. At the same time that the secret followers of Zobrist are working to release the virus, there are several others trying to steal it for their own selfish gain.

Langdon and Brooks set out on their own mission to get to the virus before anyone dangerous retrieves it, but the narrative is full of so many double-crosses that it becomes difficult to know who to trust. It also makes the film somewhat confusing. When the audience isn’t being disoriented by the jarring visuals of Langdon’s concussion paired with apocalyptic visions that are never explained, the narrative does just as much to confuse with too many characters, most of which have different motives than are first revealed. When even Langdon’s intelligence can’t be trusted, it feels like the heart of the franchise has been lost.

Along with retreating from the elements that the franchise is known for, Inferno also makes a major change to the end of the narrative in the book. Without spoiling this ending for audiences, I’ll just say that it was a change large enough to infuriate many of the fans of Brown’s book series. As it stands, there is an uncertainty to the ending provided, however morally superior it may seem. This sequel may have been more financially successful than the last two entries (while also costing considerably less to make), the backlash from the fan-base may prevent any future additions from seeing the same success.

I’m torn on the 4K presentation of Inferno, because many of the early hallucinatory sequences look fantastic in Ultra HD, but these are also among my least favorite parts of the film. There is also no denying the visual and audio enhancements for the rest of the film, but more often than not it feels unnecessary. Some films demand increased definition and a higher range of colors, but Inferno is a below average film in any presentation. At least Hanks has done away with his mullet hairstyle, as nobody needed to see that in 4K.

The 4K release includes a Blu-ray disc, which contains an alternative way of viewing the film as well as the special features, which could not be included on the Ultra HD disc. There is also a Digital HD copy of the film included. The special features on the Blu-ray include five featurettes, several of which are just character profiles, a director’s journal from Howard, and a collection of deleted/extended scenes.