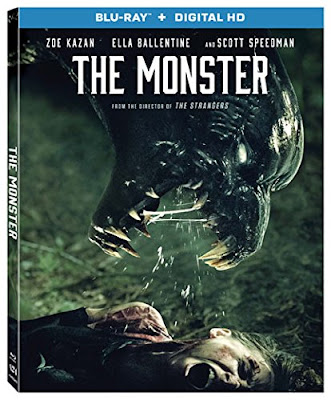 In The Strangers, a couple must deal with a sudden home invasion while attempting to navigate their relationship after a failed proposal. In The Monster, a mother and daughter struggle with their complicated relationship as they travel down a remote country road during a rainy night. As we witness in the opening sequence and the flashbacks that follow, Kathy (Zoe Kazan) is an unreliable parent, struggling with alcoholism while forcing Lizzy (Ella Ballentine) to take on an unfair amount of responsibility as a result. After deciding to live with her father to escape this cycle, Lizzy is let down by her mother once again when she sleeps in past their planned time of departure. As a result, the pair is forced to travel through the rainy woods in the dead of night.

After something in the road causes them to lose control, Kathy and Lizzy accidentally hit a wolf in the road, disabling their car in the middle of nowhere. Thankfully, the typical excuses for failed cell phones are never utilized. The battery doesn’t die and there is plenty of coverage to call for help, but the arrival of a mechanic and an ambulance only provides additional victims for the creature that caused the crash. At first Kathy and Lizzy remain unaware of the dangers lurking in the dark, until the carcass of the wolf suddenly vanishes.

Though it eventually escalates into a typical creature-feature battle, much of The Monster is a slow burn, building the character relationships alongside the dread of the unknown. Visions of the monster are minimized for much of the film, just as visiting aggressors in The Strangers remain a mystery up to the end. Bertino seems to understand that sometimes less is more, and that the unknown is often most terrifying. And when the monster is finally revealed in all of its terrifying glory, the design is unique enough to feel worthy of the delayed gratification.

As spectacularly capable as Bertino is of developing suspense around a scenario, building the conflict as an allegory for the relationship of those involved, The Monster sacrifices a great deal of logic to make this work. Many of the illogical decisions made by Kathy as a way for them to survive can be explained away by her poor parenting skills, but that would defeat the message that Bertino seems to be making. He shows in the extreme situation that Kathy is ultimately a far better parent than daily existence of the flashbacks may have suggested, but that doesn’t make the rashness of her choices in fighting the monster any more frustrating for audience members rooting for their survival. At times it toes right up to the edge of feeling manipulative, only saved by the effective performances from the lead actors. Kazan effectively plays against type, while Ballentine continues her established young career, which includes multiple roles of children in distress.

The Blu-ray release of The Monster includes a brief featurette in the extras, at just over 7-minutes long. Though this is not long enough to go into much detail, it does give the audience a closer look at the creature and how some of the effects were created. There is also a Digital HD copy of the film, but the Blu-ray is the preferred way of viewing the film. On top of the effectiveness of the creature in high definition, Bertino film is full of rich cinematography by Julie Kirkwood.