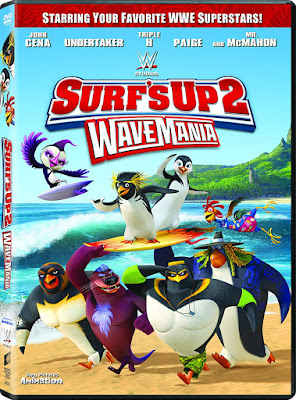 Comparisons to Happy Feet are unfair, but even comparing Surf’s Up 2: WaveMania to the original 2007 film highlights the shortcomings of the sequel. In some ways, this sequel is almost too similar to the original, at least in terms of themes and character development. The entire point of the first film was to show the personal growth of the protagonist, Cody (voiced by Jeremy Shada this time around), as he realizes that winning isn’t everything. As if the first film had never occurred, we join Cody as he continues to struggle with ego issues that are damaging to his relationships.

When a famous group of surfers known as The Hang Five (voiced by WWE wrestlers, John Cena, Undertaker, Triple H, Paige, and Mr. McMahon) show up on the island looking for new recruits, Cody is convinced that his dream has finally come true. But rather than just taking Cody, The Hang Five decides to also bring Chicken Joe (Jon Heder), Lani (Melissa Sturm), and Tank (Diedrich Bader) also, in order to determine which would be best suited for the extreme adventures tackled by the group. This competition quickly goes to Cody’s head, altering the way that he behaves as if the lessons from the first film have been lost. I suppose this makes sense; after all, it has been ten years since he last learned this message.

These adventures take the group across different terrain, having them surf out of water as much as in it. They surf across sand, sea, and even lava, but the largest challenge remains internal. Cody must relearn what is most important, which is his friends. This is a message that is echoed by the way that The Hang Five treat each other, giving these characters a purpose beyond a simple crossover between Surf’s Up and the WWE.

The DVD release of Surf’s Up 2 comes with a surprising amount of extras, most of which are directed at the younger audience members. Some of these are just a bit of silly fun, including a blooper reel for the animated characters and an island tour by Chicken Joe. There is also a tutorial for drawing the characters within the film. On the production side, there is a featurette about the music in the film and a featurette about the WWE voices and some behind-the-scenes footage of their recording process.
Entertainment Value: 5/10
Quality of Filmmaking: 4.5/10
Historical Significance:  3/10
Special Features: 6.5/10