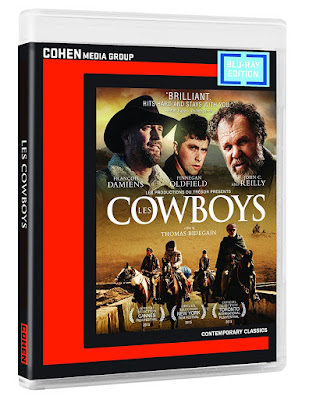 Many have made comparisons between this film and the classic western, The Searchers, which certainly gives the ending of Les Cowboys added significance. There is one major difference between the two films, however. While The Searchers is about the hunt for a girl taken by Native American Indians, Les Cowboys is about a young woman who runs away from home in order to become a Muslim. The film is about the search for this missing girl, though the twists and turns of this hunt leads to many opportunities for discussion about modern issues of immigration and the social climate in France.

Les Cowboys begins with a country western ho-down in the most unlikely of places, a vast prairie in the east of France. Alain (François Damiens) is performing a country song when his daughter suddenly disappears from the party, leading to obsessive attempts to solve the mystery. The search begins with Alain, but his perilous approach doesn’t garner any concrete results, and eventually his young son grows up and takes over in the effort. Kid (Finnegan Oldfield) eventually takes on his father’s mission, searching for answers about his sister after years of silence. At a certain point, it becomes unclear what they are even searching for.

As they discover that the girl has run away with her Muslim boyfriend, whose existence was a mystery to her entire family, the film becomes entangled in ideas of prejudice and bigotry. And the irony of these hateful assumptions is that they are forced into countenance as father and son submerges with in the very people they blame. The biggest difference lies in their approach, and can be seen in their success. Even if the commentary is not always completely clear, and the narrative offers no neat solutions, the film starts a discussion worth having.

The Blu-ray release includes a making-of featurette and the theatrical trailer. Although not all of the film resembles a classic western, there are a few moments of typical horseback traveling along expansive landscapes. These are the moments which make the high definition presentation of the Blu-ray worthwhile.