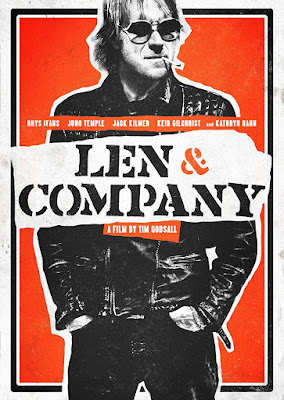 Al Pacino and Meryl Streep are only two of the many actors who have recently played an aging rock star trying to reconnect with their offspring after living selfishly for many years. Rhys Ifans adds himself to that list as Len, a punk rocker who is constantly worried about the fact that he has become sanitized by success. This makes him a bitter and difficult person to be around, but his company is exactly what is desired by his son, Max (Jack Kilmer). Hoping to receive advice from his successful father on how to start his own music career, Max idealistically surprises his father with a visit and his demo tape.

Len has retreated to his country home to avoid people, which he makes quite apparent in his treatment of the surprise guest. To his obvious annoyance, Max is followed by pop star Zoe (Juno Temple), who tracks Len down after he publicly dismisses the success that her career has had while collaborating with him. These three musicians mark various points along the journey in a life lived for rock n’ roll, though the film doesn’t have much to say about the artistic process or success. Mostly, this is just a film about these specific characters, with no larger statements or themes made apparent by the dialogue.

Although the repairing of a relationship between father and son has been a staple theme in independent and mainstream filmmaking alike, it is the delay in sentimental behavior which makes Len & Company stand apart, if only slightly. The narrative goes down the predictable path of repaired relationships through character maturation, but it handles it with minor changes rather than a complete reversal. This subtlety allows for the film to follow the predictable narrative structure without completely losing the character’s signature flippancy. It ends up exactly where I had predicted it would within the first five minutes, but the journey getting there was more enjoyable than I originally anticipated.