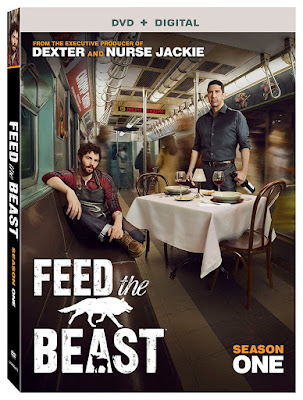 After only one season, “Feed the Beast” was cancelled, proving that not every show on AMC is a winner. Based on a Danish series about a couple of friends opening a restaurant, much must have been lost in translation along the way. Rather than focusing on the food, “Feed the Beast” throws every cliché at the audience, devolving into more of a crime show than one about cooking or the business of selling food. And when criminal activity doesn’t dominate the narrative, bad relationship melodrama takes over.

The short-lived series follows the personal and business relationship between old friends, Tommy (David Schwimmer) and Dion (Jim Sturges). Tommy is a single father still reeling from the tragic loss of his wife, though the series begins with Dion being released from prison. From the very start, “Feed the Beast” works very hard to foster the image of bad boy chef for Dion, who mostly just comes off as irresponsible and selfish. His rebellious behavior is what landed him in prison, and it is also a characteristic which makes his friendship to Tommy difficult to understand.

Whatever it is that once caused these two very different people to once be friends is no longer apparent within the narrative of “Feed the Beast,” other than constant reminders that they both shared a dream of opening a restaurant with Tommy’s deceased wife (Christine Adams). The only way that they can achieve this dream, however, is by becoming bedfellows with several unsavory characters. For Tommy, this is his father (John Doman), who has used illegal and morally questionable tactics to become successful in business. For Dion it is an actual mobster (Michael Gladis) who he owes money to already.

This crime element is added to the show on top of the fact that they are trying to open their fine dining restaurant in the Bronx. It is as if the writers have done everything they possibly could to make the restaurant business appear edgier than it is, while the important elements of the show just aren’t very good. The relationships aren’t believable between any of the characters, including a love interest written in for Tommy’s character only to sleep with Dion instead. The two leads don’t seem like friends, none of the romantic storylines have any chemistry, and even Tommy’s relationship with his son is plagued by the cliché decision to have him refusing to speak since his mother’s death. That is, right until the expected cheesy moment that he yells “Daddy” before the end of the cancelled show.
Rarely is a show this sloppily constructed picked up by the AMC network, though they certainly self-corrected quickly. The first (and only) season of “Feed the Beast” is available on a 3-disc DVD set, which comes with a Digital HD copy of the same. There are actually quite a few special features, including commentary tracks, featurettes, deleted scenes, and even a gag reel. Unfortunately, the show doesn’t really deserve that much attention.