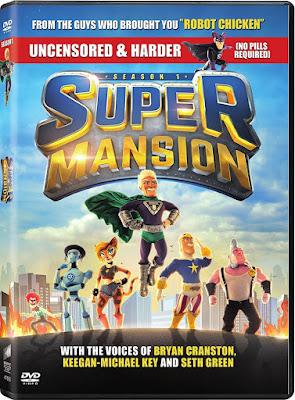 It isn’t difficult to imagine “Supermansion” coming from the same minds as “Robot Chicken,” as it often feels as if the formula would have worked better as a shorter segment within that show. While the formula of “Robot Chicken” allows for gags and skits to be discarded as soon as they stop working, “Supermansion” remains stuck in the same jokes for the entire season. Even though a few bold narrative choices are made along the way, this is a show that irreverently spoofs the superhero genre, so the effectiveness (or lack thereof) of the humor is more significant than plot twists or character development.

Although it might seem that Adult Swim would be the perfect home for a show such as this (joining “Robot Chicken”), “Supermansion” is yet another desperate attempt to get audiences to use the streaming service of Crackle. Despite the free viewing options, I don’t know many people who have delved into this viewing site. When I tried to watch “Community,” a show revived by the streaming service, it had enough technical issues to keep me away. While they have recently had more success getting some viewers to watch a few of their other shows, I can’t imagine “Supermansion” being the site’s savior.

They clearly put a decent amount of money into the show, at least in terms of the voice actors that they were able to get, but something about it still feels somewhat unoriginal. Even expanding the idea into a continuous narrative, somehow this show just feels like an extended skit within an episode of “Robot Chicken.” I often felt myself longing for the gag to end and for the next skit to begin, but was unfortunately stuck with these same characters for the entire first season.

These gags may be funny at first, especially when they poke fun at the ever-popular superhero genre, but the humor wears thin when the writers simply repeat the same running jokes throughout the season. Titanium Rex (voiced by Bryan Cranston) is an aging Superman-like alien superhero, although he emerged from the Earth’s core rather than space. When Rex discovers that he is a father to a young woman named Lex (Jillian Bell), she begins training to join the league of superheroes. Along with Lex and Rex, these heroes include Black Saturn, whose gravel voice (lent by Tucker Gilmore) and costume is clearly referencing Batman, an oversexualized female hero named Cooch (Heidi Gardner), a hulked-out massive muscle-man in Brad (Tom Root), a Jewish robot called Jewbot (Zeb Wells), and a Captain America type in American Ranger (Keegan-Michael Key). Guest actors such as Seth Green, Chris Pine, and Ron Perlman also lend their voices to supporting characters.

Despite all of the talent lending their voice to the show, there are a surprising number of episodes that are entirely forgettable. Even with only 13 episodes in the first season, it seemed to drag. Part of the issue was the lengthier episodes. Again, this might have been easier to swallow if not already accustomed to the 10-minute format of “Robot Chicken.” Uncensored versions of all 13 episodes are included in the 2-disc DVD set of the first season. I have no idea if there will be a second season. I don’t really care all that much, and the carnage of the last episode seems to imply that the show runners feel the same or don’t expect to get renewed. There are no special features to mention.
Entertainment Value: 6/10
Quality of Filmmaking: 5.5/10
Historical Significance:  3/10
Special Features: 0/10