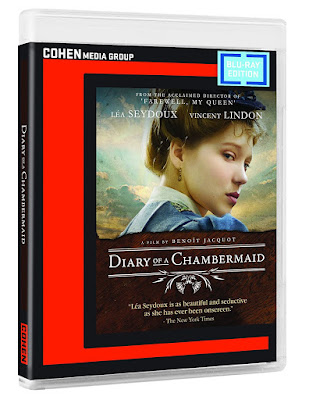 The film follows a young Parisian chambermaid named Célestine (Seydoux) after she is assigned to a post at a home in the provinces, scandalized by her sexual promiscuity within her former house of employment. Immediately resentful of her employer and all around her, Célestine fulfills her duty with an attitude and constant remarks muttered under breath, forced to put up with the vigilant mistress (Clotilde Mollet) and her groping husband (Hervé Pierre). The only allies that she may find are her fellow servants, the cook and the gardener.

Célestine takes a special interest in the gardener, Joseph (Vincent Lindon), perhaps merely because he is the only man not making sexual advances towards her. Or, even more disturbingly, she could be attracted to him for his angry and spiteful worldviews, which include outright anti-Semitism. While I am sure this has some significance within the source material, the animosity towards Jewish people seemed a bizarrely unrelated addition in Jacquot’s film.

Something seems to be missing from the film, even though all that is presented has a technical excellence which is worth mentioning. The film looks right, and Seydoux gives a performance that never feels off-key, but the movie never engages the way that it should. Instead of joining the great filmmakers before him, who each put their distinct stamp on this narrative, Jacquot has made a surprisingly dull and unnecessary adaptation.

The special features include a making-of featurette and the theatrical trailer.
Entertainment Value: 4.5/10
Quality of Filmmaking: 6.5/10
Historical Significance:  4/10
Special Features: 3.5/10