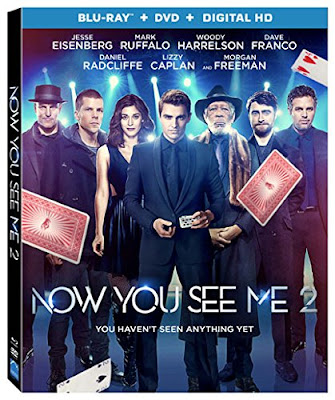 After a year in hiding following the events of the first film, the Four Horseman return to the spotlight again in order to take down a privacy-violating tech company. Actually, three of them are back, with Isla Fisher replaced by Lizzy Caplan due to an untimely pregnancy for the actress. Caplan plays a macabre magician named Lula, whose specialty is the kind of illusions you might see Criss Angel perform. Everything else is basically the same as it was last film. Atlas (Jesse Eisenberg) still arrogantly wants to be the one in charge, while FBI agent Dylan Rhodes (Mark Ruffalo) is still the group’s covert leader. McKinney (Woody Harrelson) has taught Wilder (Dave Franco) his hypnotism tricks in the free time faking his own death, but hasn’t learned anything new himself. When the secret of Wilder’s death and the double-agent status of Rhodes are revealed during their latest appearance, the Horsemen realize that they are the ones who have been tricked.

The show ends in chaos and with the Four Horsemen vanishing while Rhodes is pursued by the authorities. The magicians are inexplicably sent across the globe to China, blackmailed by a tech prodigy named Walter Mabry (Daniel Radcliffe) to steal something for him. Meanwhile Rhodes is forced to team up with Thaddeus Bradley (Morgan Freeman), who was put in prison by the group at the end of the first film. Their other victim from the original, Arthur Tressler (Michael Caine), also inevitably shows up in the narrative looking for revenge.

The first film may have had a few unrealistic moments amidst the use of real illusions and magic tricks, but the sequel spends most of its time on unrealistic and illogical spectacle. Some of the tricks are given brief explanations, but they make far less sense once you stop to think about it. When performing on the street, their sudden disappearance is explained by holes cut into the wall of buildings. Where did the holes come from? How did they put them there without people noticing, or were there always obvious holes in the side of buildings? Other times we are given quick explanations, told that strobe lights make raindrops appear to change directions. How is that possible? These are all questions you are not supposed to ask, because the movie attempts to move at a pace quick enough to distract you from logic. Now You See Me 2 is entertaining in a mindlessly diverting way, so long as you can dismiss any inclinations towards thinking about what you have watched.

There is already a plan for Now You See Me 3, which I fully expect to be as unrealistic as all of the latest Fast and Furious sequels, and with an exponentially growing cast list (Fisher is said to return in the next film). The Blu-ray release for this first sequel includes a DVD and Digital HD copy of the movie, along with a few exclusive extras. Only on the Blu-ray are two featurettes which cover the ensemble cast and the tricks of making magic exciting on film. Also included in the special features are an additional featurette and a commentary track with director Jon M. Chu.